The greatest limitation of Doppler radar, i.e., its inability to measure range, may be overcome if the transmitted carrier is Frequency Modulated Continuous Wave Radar. If this is done, it should be possible to eliminate the main difficulty with CW radar in this respect, namely, its inability to distinguish one cycle from another. Using FM will require an increase in the bandwidth of the system, and once again it is seen that a bandwidth increase in a system is required if more information is to be conveyed (in this case, information with regard to range). 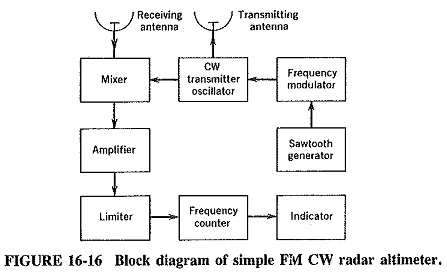 Figure 16-16 shows the block diagram of a common application of the Frequency Modulated Continuous Wave Radar system, the airborne altimeter. Sawtooth frequency modulation is used for simplicity, although in theory any. modulating waveform might be adequate. If the target (in this case, the Earth) is stationary with respect to the plane, a frequency difference proportional to the height of the plane will exist between the received and the transmitted signals. It is due to the fact that the signal now being received was sent at a time when the instantaneous frequency was different.

If the rate of change of frequency with time due to the FM process is known, the time difference between the sent and received signals may be readily calculated, as can the height of the aircraft. The output of the mixer in Figure 16-16, which produces the frequency difference, can be amplified, fed to a frequency counter and then to an indicator whose output is calibrated in meters or feet.

The altimeter is a major application of Frequency Modulated Continuous Wave Radar. It is used in preference to pulsed radar because of the short ranges (i.e., heights) involved, since CW radar has no limit on the minimum range, whereas pulsed radar does have such a limit. Fairly simple low-power equipment can be used, as with CW Doppler radar. Because of the size and proximity of the Earth, small antennas can also be used, reducing the bulk of the equipment even further.

A typical altimeter operates in the C band, uses a transmitter power typically from 1 to 2 W, easily obtained from an IMPATT or a Gunn diode, and has a range of up to 10,000 m or more, with a corresponding accuracy of about 5 percent.