A Pulsed Radar Systems is generally required to perform one of two tasks: It must either search for targets or else track them once they have been acquired. Sometimes the same radar performs both functions, whereas in other installations separate radars are used. Within each broad group, further subdivisions are possible, depending on the specific application. The most common of these will now be described.

The general discussion of Pulsed Radar Systems so far in this chapter has revealed the basic features of search radars, including block diagrams, antenna scanning methods and display systems. It has been seen that such a Pulsed Radar Systems must acquire a target in a large volume of space, regardless of whether its presence is known. To do this, the radar must be capable of scanning its region rapidly. The narrow beam is not the best antenna pattern for this purpose, because scanning a given region would take too long. Once the approximate position of a target has been obtained with a broad beam, the information can be passed on to a tracking radar, which quickly acquires and then follows the target. Another solution to the problem consists in using two fan-shaped beams (from it pair of connected cut paraboloids), oriented so that one is directional in azimuth and the other in elevation. The two rotate together, using helical scan, so that while one searches in azimuth, the other antenna acts as a height finder, and a large area is covered rapidly. Perhaps the most common application of this type is the air-traffic-control, radar used at both–military and civilian airports.

If the area to be scanned is relatively small, a pencil beam and spiral scanning can be used to advantage, together with a PPI display unit. Weather avoidance and airborne navigation radars are two examples of this type. Marine navigation and ship-­to-ship radars are of a similar type, except that here the scan is simply horizontal, with a fan-shaped beam. A typical marine radar installation is shown in Figure 16-11. 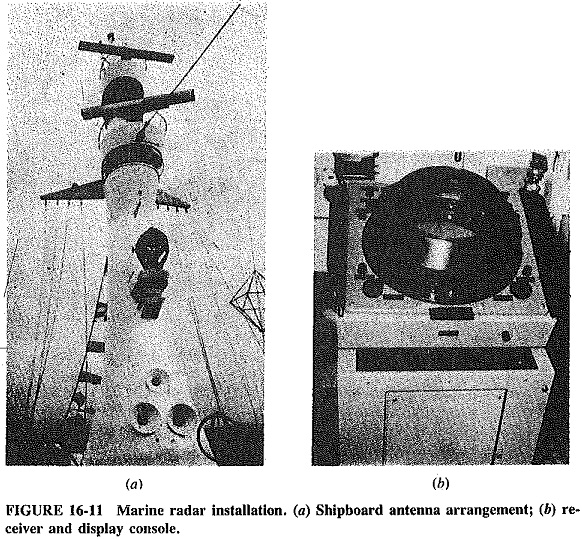 Early-warning and aircraft surveillance radars are also acquisition radars with a limited search region, but they differ from the other types in that they use UHF wavelengths to reduce atmospheric and rain interference. They thus are characterized not only by huge powers, but also by equally large antennas. The antennas are stationary, so that scanning is achieved by moving-feed or similar methods.

Once a target has been acquired, it may then be tracked, as discussed in the section dealing with antennas and scanning. The most common tracking methods used purely for tracking are the conical scan and monopulse systems described previously. A system that gives the angular position of a target accurately is said to be tracking in angle. If range information is also continuously obtained, tracking in range (as well as in angle) is said to be taking place, while a tracker that continuously monitors the relative target velocity by Doppler Shift is said to be tracking in Doppler as well. If a radar is used purely for tracking, then a search radar must be present also. Because the two together are obviously rather bulky, they are often limited to ground or shipborne use and are employed for tracking hostile aircraft and missiles. They may also be used for fire control, in which case information is fed to a computer as well as being displayed. The computer directs the antiaircraft batteries or missiles, keeping them pointed not at the target, but at the position in space where the target will be intercepted by the dispatched salvo (if all goes well) some seconds later.

Airborne tracking radars differ from those just described in that there is usually not enough space for two radars, so that the one system must perform both functions. One of the ways of doing this is to have a radar system, such as the World War II SCR-584 radar, capable of being used in the search mode and then switched over to the tracking mode, once a target has been acquired. The difficulty, however, is that the antenna beam must be a compromise, to ensure rapid search on the one hand and accurate tracking on the other. After the switch-over to the tracking mode, no further targets can be acquired, and the radar is “blind” in all directions except one.

Track-While-Scan (TWS) radar is a partial solution to the problem, especially if the area to be searched is not too large, as often happens with airborne interception. Here a small region is searched by using spiral scanning and PPI display. A pencil beam can be used, since the targets arrive from a general direction that can be predicted. Blips can be marked on the face of the CRT by the operator, and thus the path of the target can be reconstructed and even extrapolated, for use in fire control. The advantage of this method, apart from its use of only the one radar, is that it can acquire some targets while tracking others, thus providing a good deal of information simultaneously. If this becomes too much for an operator, automatic computer processing can be employed, as in the semiautomatic ground environment (SAGE) system used for air defense. The disadvantage of the system, as compared with the pure tracking radar, is that although search is continuous, tracking is not, so that the accuracy is less than that obtained with monopulse or conical scan.

Tracking of extraterrestrial objects, such as satellites or spacecraft, is another specialized form of tracking. Because the position of the target is usually predictable, only the tracker is required. The difficulty lies in the small size and great distance of the targets. This does not necessarily apply to satellites in low orbits up to 600 km, but it certainly is true of satellites in synchronous orbits 36,000 km up, and also of space vehicles. Huge transmitting powers, extremely sensitive receivers and enormous fully steerable antennas are required.

In connection with deep-space tracking, it should be mentioned that not all radars are monostatic (transmitting and receiving antennas located at the same point), although the vast majority of them are. Some Pulsed Radar Systems may for convenience be bistatic, with the transmitter and receiver separated by quite large distances. The example described may perhaps be the principal use of bistatic radar.