What is Cathode Ray Tube (CRT) of an Oscilloscope?:

What is Cathode Ray Tube (CRT) of an Oscilloscope? – To understand the principle of an Electron Beam Experiment in CRT, let us consider a torch which is focused on a piece of cardboard (held perpendicular to the torch). The light beam will make a bright spot where it strikes the cardboard or screen. Hold the torch still, the spot remains still, move the torch, the spot also moves. If the movement is slow, the eye can follow the movement, but if it is too fast for the eye to follow, persistence of vision causes the eye to see the pattern traced by the spot. Hence when we wave the torch from side to side, a horizontal line is traced; we can similarly have a vertical line or a circle. Hence, if the torch is moved in any manner at a very rapid rate, light would be traced, just like drawing or writing.

A similar action takes place in the Cathode Ray Tube of an oscilloscope. The torch is replaced by an electron gun, the light beam by a narrow Electron Beam Experiment in CRT, and the cardboard by the external flat end of a glass tube, which is chemically coated to form a fluorescent screen. Here the electron gun generates the beam which moves down the tube and strikes the screen. The screen glows at the point of collision, producing a bright spot.

When the beam is deflected by means of an electric or magnetic field, the spot moves accordingly and traces out a pattern. The electron gun assembly consists of the indirectly heated cathode with its heater, the control grid, and the first and second anodes.

The control grid in the Cathode Ray Tube is cylindrical, with a small aperture in line with the cathode. The electrons emitted from the cathode emerge from this aperture as a slightly divergent beam. The negative bias voltage applied to the grid, controls the beam current. The intensity (or brightness) of the phosphorescent spot depends on the beam current. Hence this control grid bias knob is called or labelled as intensity.

The diverging beam of electrons is converged and focused on the screen by two accelerating anodes, which form an electronic lens. Further ahead of the grid cylinder is another narrow cylinder, the first anode. It is kept highly positive with respect to the cathode. The second anode is a wider cylinder following the first. Both the cylinders have narrow apertures in line with the Electron Beam Experiment in CRT. The second anode is operated at a still higher positive potential and does most of the acceleration of the beam. The combination of the first anode cylinder and the wider second anode cylinder produces an electric field that focuses the electron beam on the screen, as a lens converges a diverging beam of light.

The electronic lens action is controlled by the focus control. If this control is turned to either side of its correct focusing position, the spot on the screen becomes larger and blurred. Bringing it back to its correct position brightens and concentrates the spot. With this proper focus, the small spot can be deflected to produce sharp narrow lines that trace the pattern on the Cathode Ray Tube screen.

Most oscilloscopes use electrostatic deflection, since it permits high frequency operation and requires negligible power. Electromagnetic deflection is most common in TV picture tubes.

Electrons are negatively charged particles, they are attracted by a positive charge or field and repelled by a negative charge. Since the electron beam is a stream of electrons, a positive field will divert it in one direction and a negative field in the opposite direction. To move the beam in this way in the CRT, deflecting plates are mounted inside the tube and suitable deflecting voltages are applied to them. 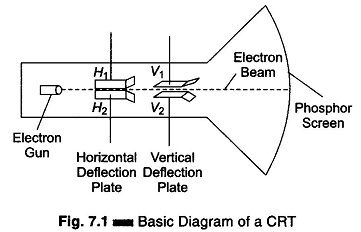 These plates are arranged in two pairs; H1 and H2 for deflecting the beam horizontally, and V1 and V2 for deflecting it vertically. Leads are taken out for external connections. The beam passes down the tube between the four plates, as shown in Fig. 7.1. 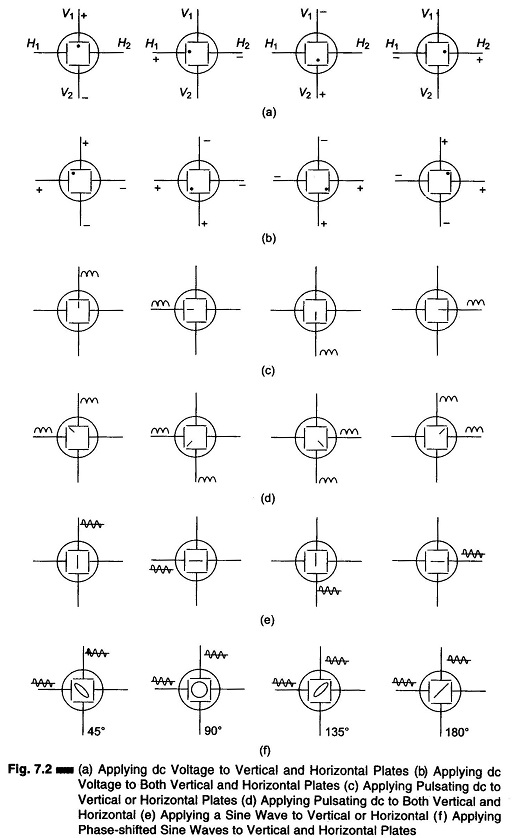 Figure 7.2 shows the various positions of the Electron Beam Experiment in Cathode Ray Tube for different voltages applied to the two pairs of plates. If a negative voltage is applied to any plate, the beam will be repelled rather than attracted and the deflection will be in the opposite direction. For example, if V1 is made negative, the beam will be deflected vertically downward.

Now, let us see what happens to the beam when voltage is applied simultaneously to both vertical and horizontal plates.

The ac trace has equal length from the centre of screen to either tip, when the ac is symmetrical. When it is asymmetrical, the shorter part corresponds to the lower voltage half cycle.