Temperature on PN diode characteristics is very important consideration in the analysis or design of electronic devices or systems. It affects virtually all of the characteristics of a semiconductor device.

The diode current at a given voltage depends upon the operating temperature. The variation may be determined from Eq. (7.20), where the temperature is contained implicitly in VT and also in the reverse saturation current I0.

Taking the derivative of the above equation we have

The performance of commercial diodes is only consistent with above result. The reason for the discrepancy is that, in a practical diode, there is a component of the reverse saturation current due to leakage over the surface that has not been taken into account in Eq. (7.29). Since leakage component is independent of temperature, it may be expected to find a smaller rate of change of I0 with temperature than that predicted above.

Germanium is more temperature dependent than silicon because its reverse saturation current is approximately 1,000 times larger. 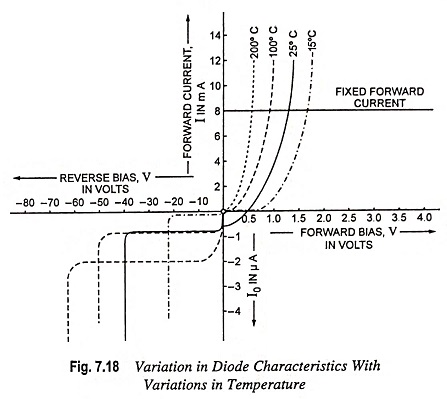