Resistance Temperature Detector (RTD) commonly use platinum, nickel or any resistance wire whose resistance varies with temperature and which has a high intrinsic accuracy. They are available in many configuration and sizes; as shielded or open units for both immersion and surface applications.

Resistance Temperature Detector are wire-wound resistance with moderate resistance and a PTC of resistance. Platinum is the most widely used resistance wire type because of its high stability and large operating range. However, Nickel and Copper are also used in RTDs. The temperature ranges for various resistance wire are given in Table 13.1.

Platinum RTDs provide high accuracy and stability. They have the following advantages:

RTD’s are not adaptable to applications requiring fast response or small area temperature sensing. Measurement of temperature using RTD is done after proper calibration that involves conversion of resistance value to temperature.

Most RTD instruments use a Wheatstone’s Bridge or its modified version. The RTD and its leads are connected in one of its arms. This bridge is essentially a resistance measuring device which converts the resistance of the RTD into an electrical signal that is used for monitoring or controlling temperature. The basic Wheatstone’s Bridge with a two wire RTD connected is as shown in Fig.13.38. 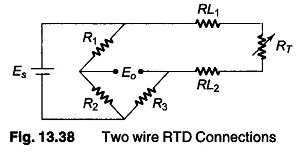 The value of RT at the control point or at the mid point of the temperature range to be monitored will influence the arm resistors R1, R2 and R3. Also, these values must be selected to limit bridge currents to avoid self-heating of RTD or bridge resistors. For achieving high accuracy, the bridge must be stable and insensitive to ambient temperature variations.

However, the errors introduced by long leads are significant and can be reduced by using thick lead wire. As an effective method to obtain a high degree of accuracy, it is desirable to use lead resistance compensation techniques or lead error elimination technique such as three wire and four wire RTD connections.

Two lead Resistance Temperature Detector which is lower in cost, is normally used when the lead resistance is low in comparison with Ohms/°C resistance change of the RTD or when lead wire resistance compensation is provided in the instrumentation.

Three lead wire RTD, offers a practicable method for lead wire compensation that is sufficiently accurate for most industrial applications. The bridge circuit automatically compensates resistance change due to ambient temperature change, which is the input to the instrumentation. A three lead Resistance Temperature Detector connected to a Wheatstone Bridge circuit is as shown in Fig. 13.39. 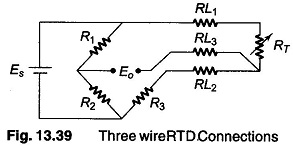 Referring to Fig. 13.39, it can be seen that one of the RTD leads L1 is in the arm of the bridge with RT and a second lead L2 is in the adjacent arm with R3.

The three lead RTD gives sufficient accuracy for most of the industrial appli­cations. However, when a higher degree of accuracy and precision is required, a four lead RTD connection is used.

To select a 100 Ω Platinum RTD, the information given in Table 13.2 is helpful. 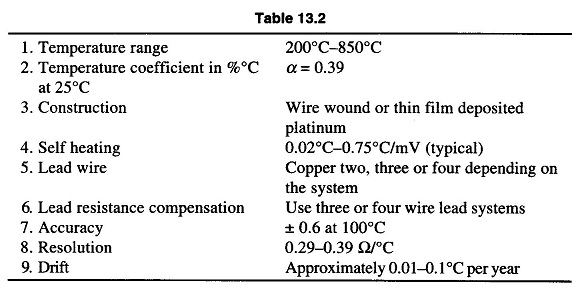