Platinum Thin Film RTD Sensors are manufactured by a very thin layer of platinum in suitable pattern to achieve smaller dimension and higher resistance, on a ceramic base. The deposition of layers and introduction of patterns are obtained using different methods. 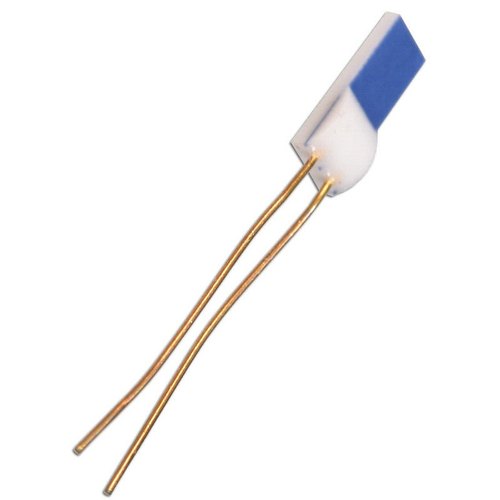 Normally, a number of such chips are manufactured on a single large substrate and the chips are properly cut and proper contacts are made. This platinum layer is usually coated with suitable material depending on the operating range to provide protection against mechanical and chemical damages.

The advantage of thin film sensors is reduction in the size and simultaneous increase in the nominal resistance. The response time is reduced by nearly 10 times or more because of the reduction in size. By using such a type of sensor, it is possible to manufacture a probe with a stainless steel sheath of 2 mm diameter.

The sensitivity of the sensor also increases with increase in nominal resistance. The small dimension of Platinum thin film RTD sensors allows temperature measurements in very small areas with a much higher accuracy as compared to the thermocouple.

Thin film sensors are cheaper to manufacture than wire wound RTDs, hence can be used in many fields of application for resistance thermometers such as automobiles, medical thermometer, etc.