The definition of Sensors and Transducers are follows,

The input quantity for most instrumentation systems is nonelectrical. In order to use electrical methods and techniques for measurement, the nonelectrical quantity is converted into a proportional electrical signal by a device called “transducer”.

Let us discuss the operation and applications of different types of available Sensors and Transducers.

The light dependent resistor (LDR) is used as a light sensor. It is made of cadmium sulphide or cadmium selenide whose resistance depends on amount of light present. The Fig. 1529 shows the light control relay circuit using a photoresistor. 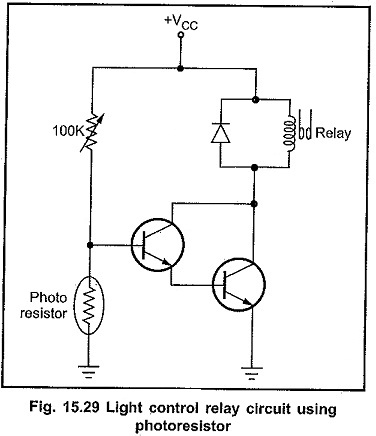 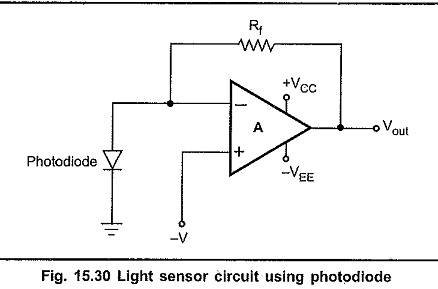 The temperature sensors can be classified as semiconductor devices, thermocouples, RTDs and thermistors. 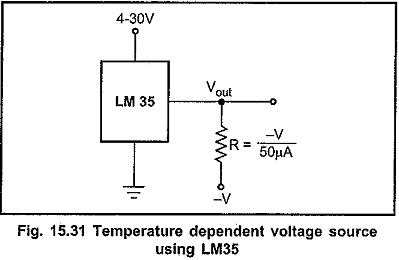 Analog device AD590 is a temperature dependent current source. It produces a current of 1 µA/°K. This current can be converted into voltage by current-voltage converter using op-amp.

A thermocouple consists of a pair of dissimilar petal wires joined together at one end, forming a hot junction and terminated at the other end known as reference or cold junction. When heat is applied to the hot junction, a temperature difference exists between the hot junction and the cold junction, causing generation of emf. This is illustrated in Fig. 15.32 (a). The magnitude of this emf depends on the material used for the wires and the temperature difference between the two junctions. The two dissimilar metals form an electric circuit, and a current flows as a result of the generated emf as shown in Fig. 15.32 (a).

When the cold junction is terminated by a meter or recording instrument, as shown in Fig. 15.32 (b), the meter indication is proportional to the thermoelectric effect, caused by constant potentials at the junctions, is known as the seeback effect.

Generally, electrical resistance of any metallic conductor varies according to temperature changes. The sensor for measurement of temperature by utilizing this phenomenon is called “Resistance Thermometer”. It is a basic element of resistance temperature detector, RTD.

Measurement of change of resistance of RTD due to temperature changes is measured by Wheatstone bridge. The Fig. 15.33 shows the necessary circuit connections. 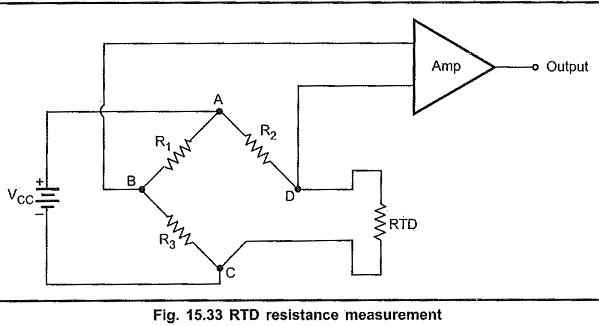 Thermistor is a contraction of a term ‘thermal-resistors‘. Thermistors are semiconductor device which behave as thermal resistors having negative temperature coefficient [NTC]; i.e. their resistance decreases as temperature increases.

Thermistors are composed of a sintered mixture of metallic oxides, such as manganese, nickel, cobalt, copper, iron, and uranium. Their resistances at ambient temperature may range from 100 Ω to 100 kΩ.

A strain guage is a small resistor whose value changes when its length is changed. It may be made of thin wire, thin foil, or semiconductor material. The desirable characteristics of the strain gauge are gauge sensitivity, range of measurement, accuracy, frequency response, and the ambient environmental conditions it can withstand.

Sensitivity is defined as the smallest value of strain that can be measured. The maximum strain measurable and the accuracy achievable depend upon the type of gauges used and the method of gauging used.

The change in resistance of strain guage can be converted into voltage change by bridge circuit followed by an op-amp. The Fig. 15.34 shows the measurement of pressure using strain guage. 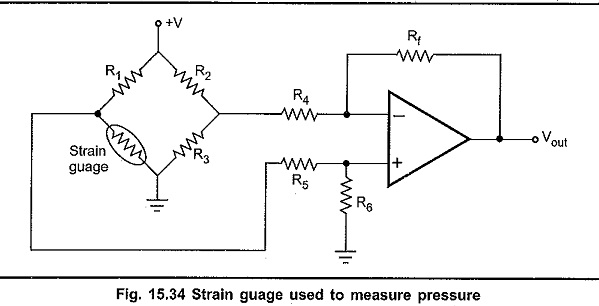 LVDT is an another type of transducer often used to measure force, pressure or position. The Fig. 15.35 shows the basic structure of LVDT. As illustrated in the Fig. 15.35, the linear variable differential transformer consists of a single primary winding P1 and two secondary windings S1 and S2 Wound on a hollow cylindrical former. The secondaries have an equal number of turns but they are connected in series opposition so that the emfs induced in the coils oppose each other. The primary winding is connected to an ac source, whose frequency may range from 50 Hz to 20 kHz. A movable soft iron core slides inside the hollow former The position of the movable core determines the flux linkage between the ac excited primary winding and each of the two secondary windings. The core made up, of nickel-iron alloy is slotted longitudinally to reduce eddy current losses. The displacement to be measured is applied to an arm attached to the core. With the core in the center, or reference, position, the induced emfs in the secondaries are equal, and since they oppose each other, the output voltage will be zero volt. 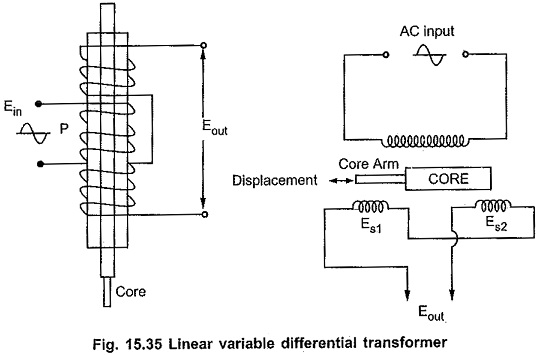 The magnitude of the output voltage is then equal to the difference between the two secondary voltages and it is in phase with the voltage of the left-hand coil. 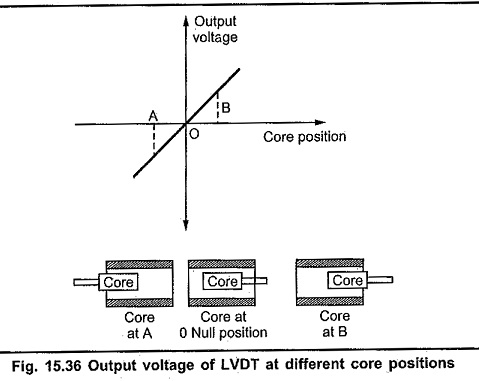 Thus the LVDT output voltage is a function of the core position. The amount of a voltage change in either secondary winding is proportional to the amount of movement of the core. By noting which output is increasing or decreasing, the direction of motion can be determined. The output ac voltage inverts in phase as the core passes through

The amount of output voltage of an LVDT is a linear function of the core displacement within a limited range of motion.