Before going to study the temperature control system, let us see the block diagram of microprocessor based process Temperature Control System. It is capable of controlling more than one physical parameter. Such systems are commonly known as data acquisition and control systems.

In these system, analog signals from various sensors are converted into digital values. These digital values are read in and processed by the microcomputer. The keyboard and display in the system allow the user to enter set point values, to read the current values of process variables, and to issue commands. Relays, D/A converters, solenoid valves, and other actuators are used to control process variables under program direction.

The sensing circuitry consists of instrumentation amplifier using transducer bridge. RTD (Resistance Temperature Dependent) is used as transducer whose resistance is changed as a function of temperature.

Rt is the resistance of RTD at temperature t.

R0 is the resistance of RTD at 0°C

If R1 = 1 K the Rf = 32.89 K. This value of Rf is not available as a standard value so it is necessary to get this value by adjusting trimpot.

To convert analog signal into digital signal 8-bit ADC 0808 is used. ADC 0808 has eight input channels, so to select desired input channel it is necessary to send 3-bit address on ADC, ADB and ADA inputs. Port lines PB0 to PB2 are used for this purpose. Schmitt-trigger inverter circuitry generates 300 kHz clock which is required to operate ADC 0808. The zener diode and LM 308 amplifier circuitry is used to produce a VCC and + VREF of 5.12 V for the A/D converter. With this reference voltage the A/D converter will have 256 steps of 20mV each.

After atleast 50 ns, this address must be latched. This (SOC) is achieved by sending ALE signal using port line PB4. After another 2.5 μs the start of conversion must be sent high and then low. Port line PB3 is used for this purpose. The end of conversion (EOC) is detected by port line PC0. The Fig. 15.40 show timing waveforms for the ADC 0808. 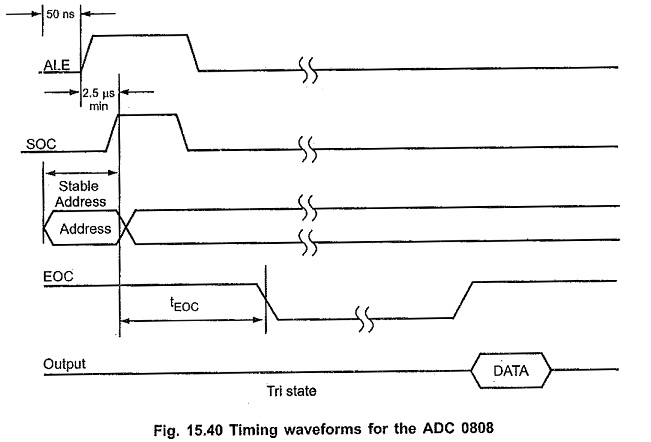 3. Circuit required to drive the controller:

As shown in the Fig. 15.41 solid state relay is used to switch ON/OFF heating element. Relay is energised and denergised using transistor switch which is controlled by port line PC7. When PC7 is high, there is a sufficient base drive to run transistor in saturation (ON) and when PC7 is low, transistor is in cut off (OFF). 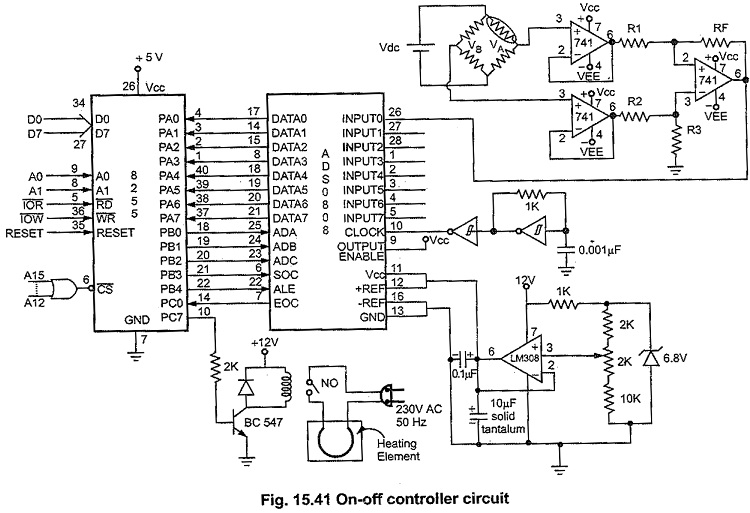