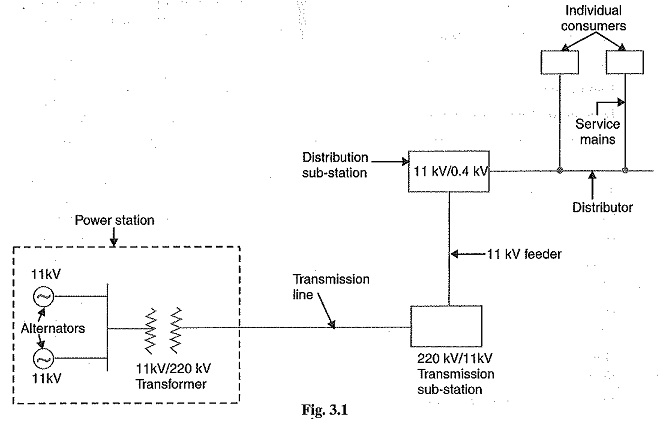 The power station generally houses two or more 3-phase alternators operated in parallel. Due to technical reasons, the generation voltage:is not very high ; it is usually 11 kV to 25kV. The power stations are located at favorable places, generally quite far away from the consumers. Owing to economical reasons, electric power has to be transmitted through transmission lines at a very high voltage. Therefore, voltage at the power station is stepped to a high value (say 220 kV) by the step-up transformer.

The following points may be noted :

1.For the sake of simplicity, we show the 3-phase circuit by a Single Line Diagram of Electrical System.

2.The 3-phase alternators at the power station are designed to produce balanced voltages.

Since a balanced 3 phase system is always solved as a single-phase circuit composed of one of the three lines and a neutral return, it is seldom necessary to show more than one phase and the neutral return when drawing a diagram of the circuit. Often the diagram is simplified further by omitting the neutral wire and by indicating the component parts by standard symbols rather than by their equivalent circuits. Such a simplified diagram of an electric power system is called Single Line Diagram of Electrical System.

3.In an actual electric power system, there are a number of protective devices (fuses, circuit breakers, relays etc.) and other equipment. The amount of information included in the Single Line Diagram of Electrical System depends on the purpose for which the diagram is intended. For example, in this chapter, we are to make load study. For this purpose, circuit breakers, relays etc. are unimportant and are omitted in the diagram shown in Fig. 3.1.