Because of one delta connection the same conditions are obtained as in Δ/Δ connection except that the impedance offered to the flow of third-harmonic currents in delta is now larger and so are third-harmonic voltages.

If the neutrals are connected, it effectively separates the three transformers. Third-harmonic currents can now flow via the neutrals. 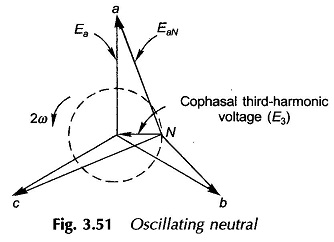 In core type transformer (Fig. 3.39(a)), the third-harmonic fluxes in all the three limbs are simultaneously directed upwards or downwards so that this flux must return through air (high-reluctance path). The high-reluctance path tends to suppress the third-harmonic flux. The phenomenon gets more complex now and at core densities exceeding 1.5 T, the total harmonic content (particularly fifth) is very marked in the magnetizing current (fifth harmonic currents can flow on lines as their relative phase difference is 5 x 120 = 600° or 120°).

To reduce the strong fifth harmonic in the magnetizing current for the star/star connection with isolated neutral, a path must be provided through iron for the third-harmonic flux. Hence, the use of a 5-limb core as in Fig. 3.39(b).