Terminals on the HV side of each phase will be labelled as capital letters A, B, C and those on the LV side will be labelled as small letters a, b, c. Terminal polarities are indicated by suffixes 1 and 2 with 1’s indicating similar polarity ends and so do 2’s. Labelling of terminals is illustrated in Fig. 3.40 for phase a. Assuming the transformer to be ideal, VA2A1 (voltage of terminal A2 with respect to A1) is in phase with Va2a1 and IA is in phase with Ia.

Star connection is formed on each side by connecting together phase winding terminals suffixes 1 as in Fig. 3.41(a). The phasor diagram is drawn in Fig. 3.41(b) from which it is easily seen that the voltages of the corresponding phases (and therefore of the corresponding lines) are in phase. This is known as the 0°-connection. The letters within brackets on the phasor diagram indicate the lines, to which the terminals are If the winding terminals on secondary side are reversed, the 180°-connection is obtained. 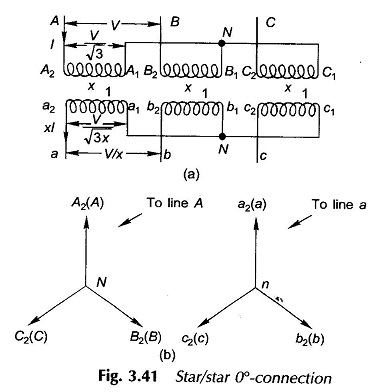 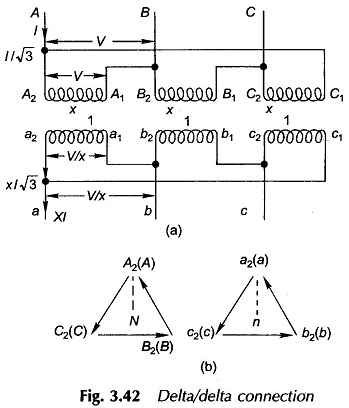 In the delta/delta connection if one of the Three Phase Transformer Connections is disconnected, the resulting connection is known as open-delta. Supposing the b-phase transformer in Fig. 3.42(a) is removed, and the open-delta is excited from balanced 3-phase supply, then it easily follows from the phasor diagram of Fig. 3.42(b) that the voltage Vb2b1 = Vbc, does not change as it equals -(Vca + Vab); thus the voltages on the secondary side still remain balanced 3-phase. The open-delta connection supplying a balanced load is shown in Fig. 3.44. If the maximum allowable secondary phase current is Iph, the transformer can handle VA of

Star connection is formed on primary side by connecting together 1 suffixed terminals; 2 suffixed terminals being connected to appropriate lines; the delta is formed by connecting c1a2,a1b2 and b1c2 with the lines connected to these junctions being labelled as a, b and c respectively as shown in Fig. 3.45(a). The phasor diagram of Three Phase Transformers is drawn in Fig. 3.45(b). It is seen from the phasor diagram on the delta side that the sum of voltages around delta is zero. This is a must as otherwise closed delta would mean a short circuit. It is also observed from the phasor diagram that phase a to neutral voltage (equivalent star basis) on the delta side lags by — 30° to the phase-to-neutral voltage on the star side; this is also the phase relationship between the respective line-to-line voltages. This connection, therefore, is known as — 30°-connection.

The + 30°-connection follows from the phasor diagram of Fig. 3.46(a) with the corresponding connection diagram as in Fig. 3.46(b).

In Indian and British practices ± 30°-connections are employed. The American practice is to use ± 90°-connections. 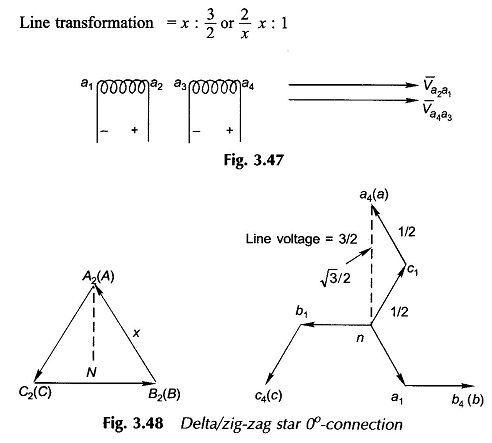 The Three Phase Transformer Connections is indicated by the phasor diagram of Fig. 3.49. 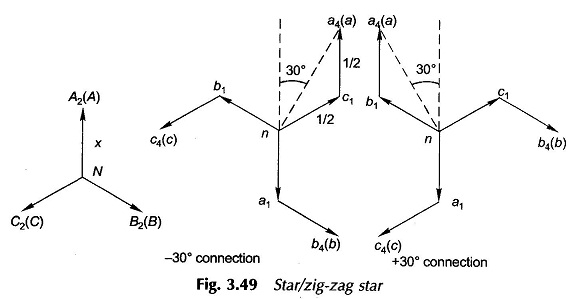