The stator current of an induction motor has the functions of producing the required air gap flux (magnetisation) as well as developing the required torque to drive the load. An Field Oriented Control of Three Phase Induction Motor motor will have its operation similar to that of a dc motor if the stator current components (viz., flux producing and torque producing) can be separately controlled. This kind of control is possible in a separately excited dc motor where the torque and flux can be separately and independently controlled by varying the armature current and field cur­rent respectively. An inherent decoupling would exist between them, but for the effects of armature reaction. These effects can be eliminated by armature compensation. A perfect decoupling can be achieved in a compensated sep­arately excited dc motor. This versatile control imparts a very good dynamic behaviour to a dc motor. Thus a high performance drive using an Field Oriented Control of Three Phase Induction Motor is achieved by attempting a decoupling of the stator current compo­nents. This principle is called field orientation control or vector control. This control improves the dynamic behaviour and a drive of very good performance can be obtained even at low speeds. The two components of the current are identified and they are oriented properly in orthogonal ordinates with respect to flux vector. 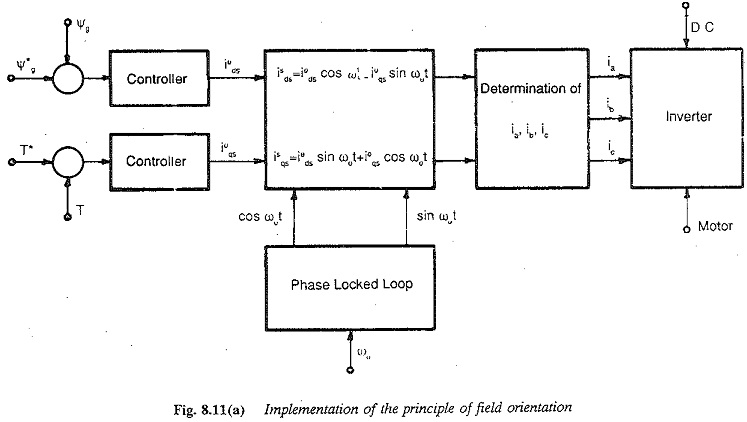 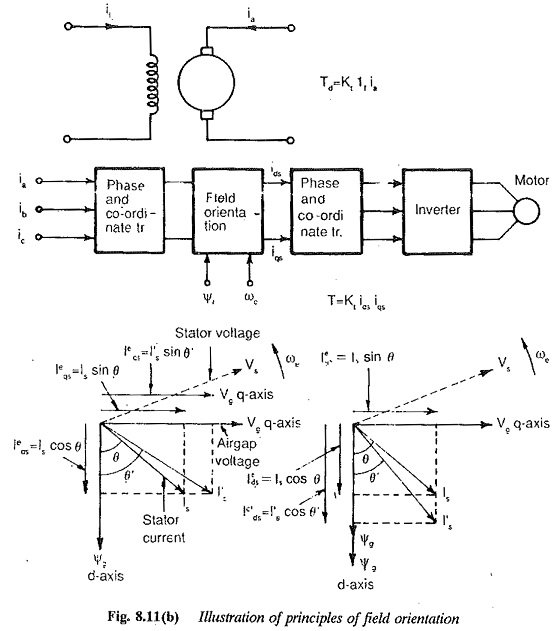 The functions of a microprocessor in the vector control of induction motor are as follows:

The mathematical operations include multiplication, division, addition and subtraction. The arithmetic processing unit of the microprocessor must be capable of performing these operations. The flux estimation may be done by numerical integration using the well known Simpson’s rule or trapezoidal rule. But the results suffer from loss of accuracy due to truncation errors in eight bit processors. These errors lead to instability of operations. Use I of floating point arithmetic with double precision improves the performance of the processor. This however requires a long time of computation. To reduce the burden on the microprocessor the flux estimation may be carried rp out by analog models external to the processor. The computed flux may be processed in the processor. The reference values of the currents and fluxes are developed by the processor. Depending upon the speed of the processor and its capacity to perform the above functions a boundary may be drawn between the local hardware and the microprocessor, to perform the functions. Sometimes multiprocessor control may be accomplished depending upon the speed and quality of control required.

Field orientation is possible with both voltage source inverter as well as current source inverter fed Field Oriented Control of Three Phase Induction Motor. The current source inverter is widely employed due to the simplicity of its power circuit. The features of field oriented control employing CSI are discussed here (8.12(a)). Sometimes a PWM inverter may be controlled suitably to provide the reference currents (Fig. 8.12(b)). This control can be accomplished using a microprocessor. 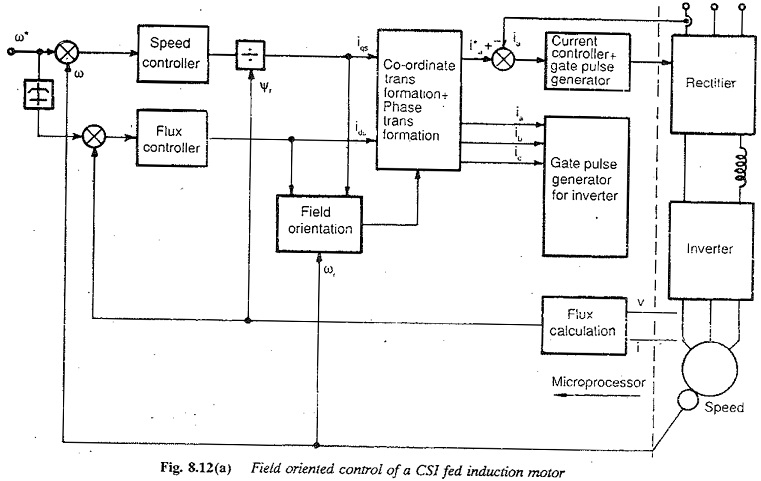 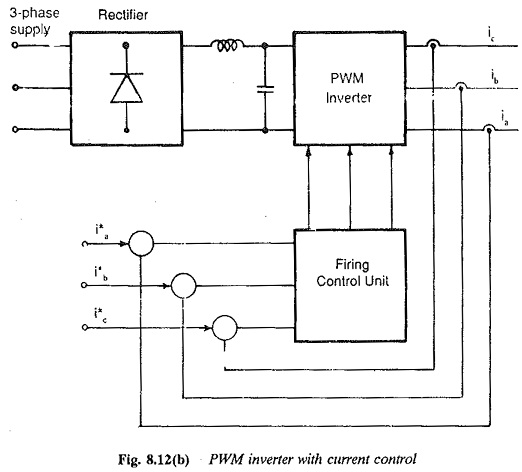 The flux may be measured directly using search coils or Hall probes. The analog signals are converted to digital ones for feeding into the microprocessor for further processing. This direct measurement, even though theoretically exact, has the following limitations or difficulties: The presence of sensitive Hall probes or search coils make the induction motor more sensitive but its inherent robustness is lost. The measured signal is superimposed by slot harmonics requiring filtering. The errors of measurement and AID conversion make the results rather unreliable. Therefore, normally the computation of the flwc using machine models is employed (indirect estimation).

These machine models for computing the flux make use of the Field Oriented Control of Three Phase Induction Motor pa­rameters determined from no-load and blocked rotor tests. The inaccuracy; of the models in the estimation of the parameters, the variation of machine! parameters due to temperature and saturation must be exactly considered in’ the estimation. The accuracy gets impaired if there is any integration involved in the estimation. This happens if voltage and speed are used in the computation. At low speeds the integration introduces considerable errors in these errors and reliable performance can be achieved over a wide range of speeds down to standstill.

To improve the performance the machine parameters used in the model must be as accurate as possible. Otherwise they can be corrected using a cor­rection process, so that the exact coupling is possible. The correction process upgrades the parameter. The indirect flux estimation along with the so-called parameter identification or adaptation is used to obtain an induction motor with perfect coupling. The flux estimated from the actual sensed variables of current and speed together with the parameters, is compared with the refer­ence value (determined from the reference quantities). The difference is used to correct the machine parameters entering into the calculations. The most influential parameter is the rotor resistance or rotor time constant and it is corrected until the required value of flux is given by the model.

The only solution for field oriented control with parameter adaptation is the use of microprocessors or microcomputers. Several techniques are avail­able in the literature for parameter adaptation. One such scheme is shown in Fig. 8.13. The microprocessor has to perform the mathematical opera­tions to estimate the flux both from the reference values as well as measured variables. 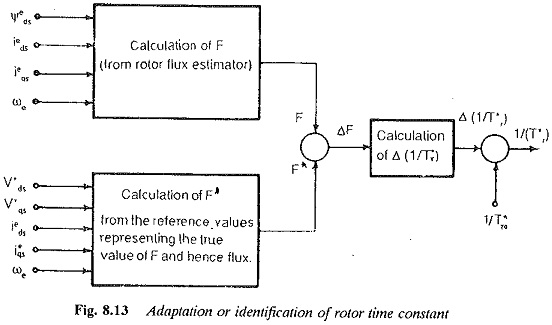 The selection of a microprocessor for the above application may be based on the following considerations:

Some other applications of a microprocessor in the control of induction motors are: