The performance Characteristics of Three Phase Induction Motor can be de­rived using the approximate equivalent circuit shown in Fig. 1.20(a). In the circuit 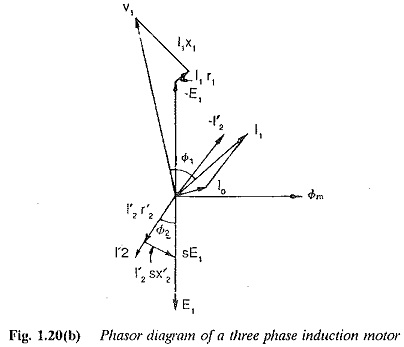 In an induction motor the power transferred to the rotor (Pd), rotor copper loss (Pcu2) and mechanical power developed (Pm) are in the ratio of 1 : s : (1 — s). The torque developed by the motor

From the equivalent circuit

The torque developed is therefore

At very small slips (operating region of the motor)

From the trend of the characteristic it can be seen that there is a maximum value for the torque. The slip at which this maximum torque occurs is given by

The maximum torque is

‘The speed-torque curve for this case is also shown in Fig. 1.21.

Note the following features of a typical speed-torque curve (Fig. 1.21):

where a=r1/r′2. When the stator resistance r1 is neglected

The operation of the motor in the range of slips 0 – sm is stable. When the motor is operating in this range any disturbance in the operating point by change of either speed or torque is damped out and the motor returns to its original operating point or attains a new one. For stable operation the torque developed must increase when the speed falls, i.e.,

The operation of the motor in the range sm. to / is unstable. In this range the curve has a positive dTd/dns, i.e. torque decreases when speed falls.

The characteristic is almost linear at very small slips (in the stable operating region). This linearity continues till the break down torque point for the case of operation with constant flux. The characteristics shown in Fig. 1.21 are redrawn in the same figure.

For slips greater than unity, the operation is in the fourth quadrant. The rotation of the rotor and the rotating magnetic field are in opposite direction. The torque developed is a braking torque, tending to stop the motor. This can occur in two ways:

The motor is operated as a brake in the range of slips (s > 1) to make it drive the load at constant speed while lowering the load. The torque is positive, whereas the direction of rotation is reversed. By a suitable resistance of the rotor the point of operation is shifted to the quadrant of operation so that the load is lowered at constant speed.

The torque-speed curve extends to the second quadrant, representing a neg­ative torque in the forward direction of rotation. This occurs if the speed of 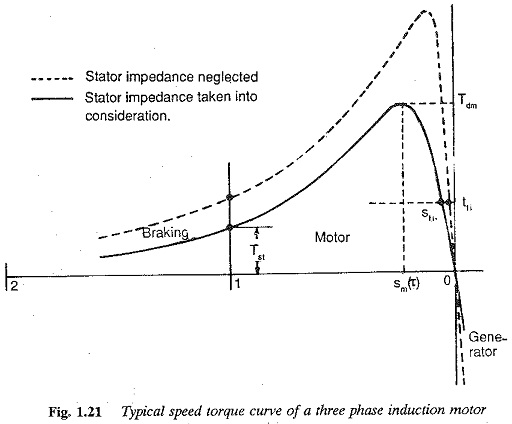 the rotor is greater than the synchronous speed. Any tendency of the rotor to accelerate beyond synchronous speed is arrested by a generating torque. In this mode of operation all the kinetic energy connected with increase in speed is returned to the mains. The maximum (break down) torque depends on the following: