The analysis of Three Phase Balanced Circuit is presented in this section. It is no way different from the analysis of AC systems in general. The relation between voltages, currents and power in delta-connected and star-connected systems has already been discussed in earlier section.

Figure 9.31(a) shows a three-phase, three-wire, balanced system supplying power to a Three Phase Balanced Circuit delta load. The phase sequence is RYB. We are required to find out the currents in all branches and lines. 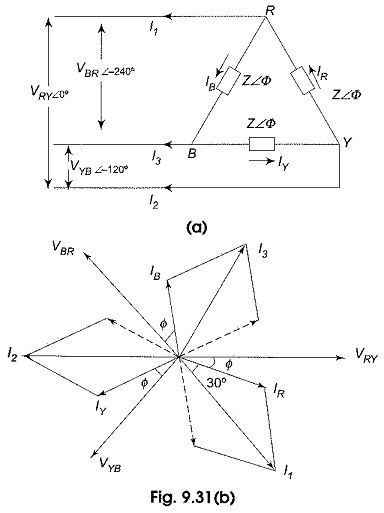 Let us assume the line voltage VRY = V ∠0° as the reference phasor. Then the three source voltages are given by

Current in line I is given by

Similarly, the current in line 2

To draw all these quantities vectorially, VRY = V ∠0° is taken as the reference vector. 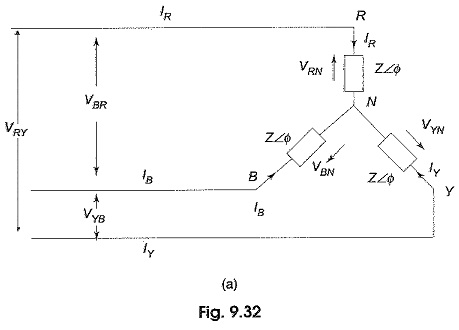 As seen from the above expressions, the currents, IR, IY and IB are equal in magnitude and have a 120° phase difference. The disposition of these vectors is shown in Fig. 9.32(b). Sometimes, a 4th wire, called neutral wire is run from the neutral point, if the source is also star-connected. This gives three-phase, four-wire star-connected system. However, if the three line currents are balanced, the current in the fourth wire is zero, removing this connecting wire between the source neutral and load neutral is, therefore, not going to make any change in the condition of the system. The availability of the neutral wire makes it possible to use all the three phase voltages, as well as the three line voltages. Usually, the neutral is grounded for safety and for the design of insulation. 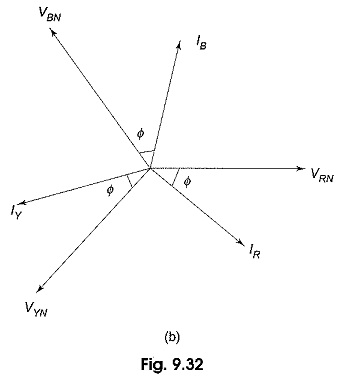