Differential Protection of Transformers is the most important type of protection used for internal phase-to-phase and phase-to-earth faults and is generally applied to transformers having ratings of 5 MVA and above. The principle of a differential relay is welt understood and discussed earlier. Any deviation from the normal ratio of the current intensities, at the input and output ends, must of necessity be caused by a fault in the protected part, so that the unbalance current can be employed directly for tripping. and indicating the fault. For this reason current differential protection combines highest selectivity with the lowest tripping time. 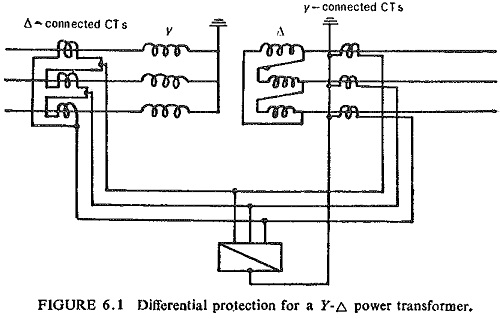 The Differential Protection of Transformers is also known as Merz-Price protection for the transformer. Figure (6.1) shows an ordinary differential protection for a three-phase star-delta power transformer. In a star-delta transformer, the load currents in the two windings are not in direct phase opposition, but are displaced by 30° and to allow for this the CT secondaries are connected in delta on the star side and in star on the delta side.

The differential scheme described suffers from the following drawbacks:

CT Characteristics: Unless saturation is avoided, the difference in CT characteristics due to different ratios being required in circuits of different voltages may cause appreciable difference in the respective secondary currents whenever through-faults occur. This trouble is aggravated in the case of transformers due to unequal ratio CTs being employed on either side of the protected transformer. A source of ratio error which results in circulating currents under through-fault condition is the unequal burden imposed on the CTs due to unequal lead lengths.

Ratio Change as a Result of Tapping: Tap changing equipment is a common feature of a power transformer which effectively alters the turns ratio. Compensating for this effect by varying the tappings on differential-protection CTs is impracticable. Biased or percentage differential relays ensure stability with the amount of unbalance occurring at the extremities of the tap-change range. Biased relays are better suited to the overall protection of variable-ratio transformers.

Magnetizing Inrush Current: When the transformer is energized, the transient inrush of magnetizing current flowing into the transformer may be as great as ten times full-load current and it decays relatively slowly. This is bound to operate the Differential Protection of Transformers falsely. The magnitude of the magnetizing inrush current is a function of the permanent flux trapped in the transformer core and the instant on the voltage cycle when it is switched on.

There are a number of ways of ensuring immunity from operation by magnetizing surges. Firstly, the relay may be given a setting higher than the maximum inrush current; secondly, the time setting may be made long enough for the magnetizing current to fall to a value below the primary operating current before the relay operates. These simple remedies are incompatible with high speed and low primary operating current. In the third method the harmonic content of the current flowing in the operating circuit is filtered out and passed through a restraining coil.