It is often necessary to measure the power being delivered to load or an antenna through a transmission line. This is often done by a sampling technique, in which a known fraction of the power is measured, so that the total maybe calculated. It is imperative, under these conditions, that only the forward wave in the main line is measured, not the reflected wave (if any). A number of coupling units are used for such purposes and are known as Directional Coupler, the two hole directional coupler shown in Figure 7-19 being among the most popular. This Two Hole Directional Coupler is discussed because it is a good illustration of transmission-line techniques and has a direct waveguide counterpart. 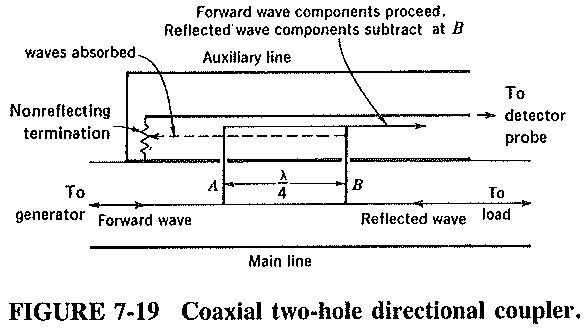 As indicated in Figure 7-19, the two hole directional coupler consists of a piece of transmission line to be connected in series with the main line, together with a piece of auxiliary line coupled to the main line via two probes through slots in the joined outer walls of the two coaxial lines. The probes do not actually touch the inner conductor of the auxiliary line. They couple sufficient energy into it simply by being near it. If they did touch, most of the energy (instead of merely a fraction) in the main line would be coupled into the auxiliary line; a fraction is all that is needed.

The probes induce energy flow in the auxiliary line which is mostly in the same direction as in the main line, and provision is made to deal with energy flowing in the “wrong” direction. The distance between the probes is λ/4 but may also be any odd number of quarter-wavelengths. The auxiliary line is terminated at one end by a resistive load. This, absorbs all the energy fed to it and is often termed a non-reflecting termination. The other end goes to a detector probe for measurement.