If the relay operates instantly without any intentional time delay, this characteristic can generally be satisfied by a relay of the non-polarized attracted armature type. This relay has a special advantage of reducing the time of operation to a minimum for faults very close to the source, where the fault current is the greatest. The Instantaneous Overcurrent Relays is effective only where the impedance between the relay and source Zs is small compared to the protected section impedance Zl.

One of the most important considerations in overcurrent and overvoltage applications is speed of operation. With hinged armature relays, operating times of 0.010 second at three times the setting can be obtained. Such relays are used for restricted earth-fault and other forms of circulating current protection. With so fast an operation it is likely that the relay may operate on transients beyond the normal range of setting.

A relay is said to overreach when it operates at a current which is lower than its setting. Now at the time of fault occurrence the current wave is not symmetrical but offset as shown in Fig. (4.9). The relay is set for symmetrical currents but responds to both symmetrical and offset current waves which persist for a few cycles. The overreach depends on the design of the relay as well as on the parameters of the power system on which it is used. The X/R ratio of the system from the source to the fault, controls the degree of offset and rate of decrement of the current wave, and the ratio Zs/Zl, determines the degree of overreach which will occur.

i.e. with 100% offset current wave-the Instantaneous Overcurrent Relays will overreach to more than twice the length of the protected section.

Actually the overreach will be reduced by the operating time of the relay because the d.c. component of the fault current will be decaying exponentially, so that

where Φ is the phase angle of the circuit (tan—1ωL/R), ψ is the time in radians after time zero at which the fault occurs and t is the time after the inception of the fault. Modern compensated relays are available which have a very low transient overreach (approximately 5%), they do not respond to offset waves by the use of a d.c. filter. In the U.S.A. induction cup instantaneous units are used, because they are less sensitive to the d.c. offset component. 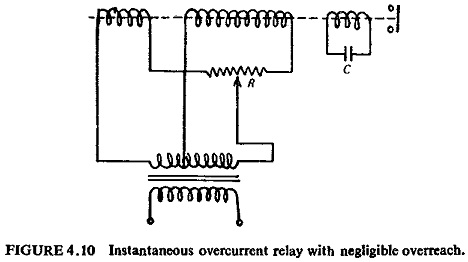 Another simple arrangement to achieve low transient overreach designed for high set overcurrent protection is shown in Fig. (4.10). The capacitor across the auxiliary winding on the operating magnet causes the circuit to resonate at 50 Hs so that the current takes a short time to build up to the getting value. The potentiometer adjustment of the setting provides a setting range maximum to minimum of 4 to 1.