The technique of Overcurrent Protection Relay in Power System is still widely used as a means of detecting faults on distribution system and on transmission lines fed from one end. In the case of lines fed from both the ends it is used along, with directional relays. Overcurrent Protection Relay are also used in conjunction with distance relays to provide backup protection.

Fault current level detectors are termed overcurrent relays; in their static form they are more complicated as compared to their electromagnetic counterpart.

The static form offers the following advantages over the electromagnetic form:

In conventional overcurrent relays, it is assumed for all practical purposes that the time of tripping varies inversely as the operating current of the relay.

The static Overcurrent Protection Relay in Power System consists of a rectifier unit which converts the a.c. signals to d.c. levels, followed by overload level detector timing circuit, level detector and a trip. Figure (12.6) represents the block schematic of a time-current relay.

The current from the line CT is reduced to 1/1000th by an auxiliary CT, the auxiliary CT has taps on the primary for selecting the desired pickup and current range and its rectified output is supplied to an overload level detector and an RC timing circuit. When the voltage on the timing capacitor has reached the value for triggering the level detector, tripping occurs.

Several methods for timing and curve shaping are available. The timing capacitor is generally charged by a voltage derived from the CT current, e.g. from the voltage across a nonlinear resistor through which the rectified current flows. This also facilitates the shaping of the time-current characteristic to a desired curve by nonlinear resistors and RC networks.

A general expression for the operating time of a time-current relay is:

t = time of operation in second

I = multiple of tap current

IP = multiple of tap current at which pickup occurs

n = index number which is empirical.

The nature of the curves and their degree of inverse characteristics have been standardized. According to British Standards following are the specified curves:

It can be seen that near about both the axes the curve become asymptotic in nature. This gives rise to two terms; the pickup current below which the relay practically does not operate and a definite minimum time of operation, which cannot be reduced further however high the relay current may be. These are clear from Fig. (12.7). 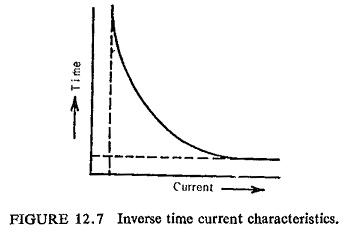 For obvious reasons of obtaining selectivity overcurrent relaying is made directional. The device reacts to the sign of the power which depends on the position of fault in relation to the point where the protective gear is installed. As the static comparators are very sensitive and it is comparatively easier to make a static directional unit reliable down to a voltage well below the minimum fault voltage there is not much of a problem of discrimination at a low voltage.

The operation of a rectifier bridge phase comparator has already been explained. Figure (12.8) shows the block schemetic of a directional Overcurrent Protection Relay in Power System.