Instantaneous Power Formula – In a purely resistive circuit, all the energy delivered by the source is dissipated in the form of heat by the resistance. In a purely reactive (inductive or capacitive) circuit, all the energy delivered by the source is stored by the inductor or capacitor in its magnetic or electric field during a portion of the voltage cycle, and then is returned to the source during another portion of the cycle, so that no net energy is transferred. When there is complex impedance in a circuit, part of the energy is alternately stored and returned by the reactive part, and part of it is dissipated by the resistance. The amount of energy dissipated is determined by the relative values of resistance and reactance.

Consider a circuit having complex impedance. Let υ(t) = Vm cos ωt be the voltage applied to the circuit and let i(t) = Im cos (ωt + θ) be the corresponding current flowing through the circuit. Then the power at any instant of time is

Equation 6.2 represents Instantaneous Power Formula. It consists of two parts. One is a fixed part, and the other is time-varying which has a frequency twice that of the voltage or current waveforms: The voltage, current and power waveforms are shown in Figs 6.1 and 6.2.

The waveform for Eq. 6.3, is shown in Fig. 6.3, where the power wave has a frequency twice that of the voltage or current. Here the average value of power is VmIm/2. 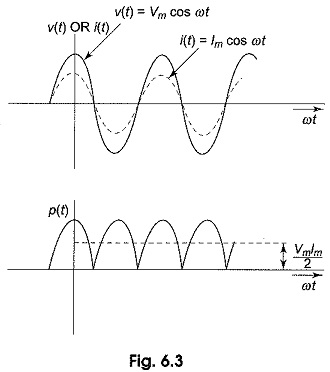