The square law detector circuit is used for demodulating modu­lated signal of small amplitude (i.e., below 1 V) so that the oper­ating region may be restricted to the nonlinear portion of the V­-I characteristics of the device. 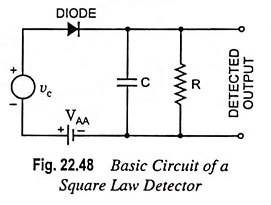 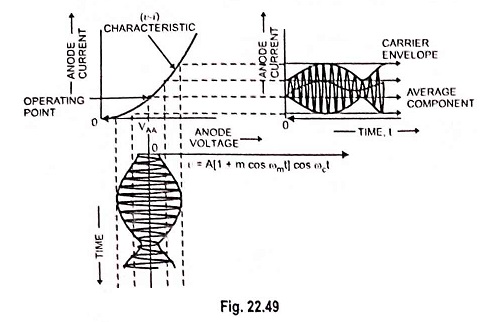 The distorted output diode current is expressed by the nonlinear v-i relationship (i.e., square law) as

where v is the input modulated voltage

AM wave may be expressed as

Now, if above equation is expanded, then we observe the presence of terms of frequencies like 2ωc, 2(ωc ± ωm), ωm and 2ωm besides the input frequency terms.

Hence, this diode current i containing all these frequency terms is passed through a low-pass filter which allows to pass the frequencies below or up to modulating frequency ωm and rejects the other higher frequency components. Thus, the modulating or baseband signal with frequency ωm is recovered from the input modulated signal.