A basic Wien bridge and an amplifier stage is shown in the Fig. 2.94. 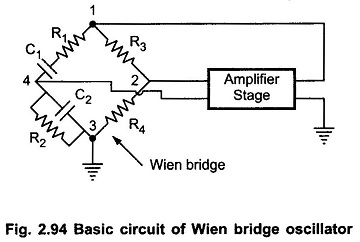 The Fig. 2.95 shows the Wien bridge oscillator using an op-amp.

To satisfy Barkhausen criterion that Aβ ≥ 1 it is necessary that the gain of the noninverting op-amp amplifier must be minimum 3.

Thus ratio of Rf and R1 must be greater than or equal to 2.

The frequency of oscillations is given by,

The feedback is given to the noninverting terminal of op-amp which ensures zero phase shift. It is used popularly in laboratory signal generators.

The various advantages of Wien bridge oscillator are,

If instead of op-amp, transistorised amplifier is to be- used then more stages are required to obtain 0° phase shift between input and output. This increases the number of components and cost. The frequency stability is poor.