The factors that contribute to the formation or accumulation of charge in the clouds are too many and uncertain. But during thunderstorms, positive and negative charges become separated by the heavy air currents with ice crystals in the upper part and rain in the lower parts of the cloud. This charge separation depends on the height of the clouds, which range from 200 to 10,000 m, with their charge centres probably at a distance of about 300 to 2000 m. The volume of the clouds that participate in Simpson Theory of Lightning flashover are uncertain, but the charge inside the cloud may be as high as 1 to 100 C. Clouds may have a potential as high as 107 to 108 V with field gradients ranging from 100 V/cm within the cloud to as high as 10 kV/cm at the initial discharge point. The energies associated with the cloud discharges can be as high as 250 kWh. It is believed that the upper regions of the cloud are usually,positively charged, whereas the lower region and the base are predominantly negative except the local region, near the base and the head, which is positive. The maximum gradient reached at the ground level due to a charged cloud may be as high as 300 V/cm, while the fair weather gradients are about 1 V/cm. A probable charge distribution model is given in Fig. 8.1 with the corresponding field gradient near the ground.

According to the Simpson Theory of Lightning (Fig. 8.2) there are three essential regions in the cloud to be considered for charge formation. Below region A, air currents travel above 800 cm/s, and no raindrops fall through. In region A, air velocity is high enough to break the falling raindrops causing a positive charge spray in the cloud and negative charge in the air. The spray is blown upwards, but as the velocity of air decreases, the positively charged water drops recombine with the larger drops and fall again. Thus region A, eventually becomes predominantly positively charged, while region B above it, becomes negatively charged by air currents. In the upper regions in the cloud, the temperature is low (below freezing point) and only ice crystals exist. The impact of air on these crystals makes them negatively charged, thus the distribution of the charge within the cloud becomes as shown in Fig. 8.2. 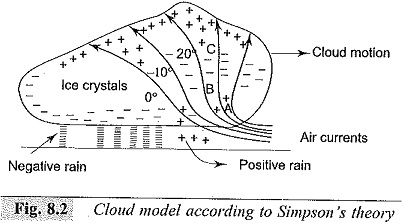 However, the above Simpson Theory of Lightning is obsolete and the explanation presented is not satisfactory. Recently, Reynolds and Mason proposed modification, according to which the thunder clouds are developed at heights 1 to 2 km above the ground level and may extend up to 12 to 14 km above the ground. For thunder clouds and charge formation air currents, moisture and specific temperature range are required.

When the upward moving supercooled water droplets act on cooler hail stone, it freezes partially, i.e. the outer layer of the water droplets freezes forming a shell with water inside. When the process of cooling extends to inside warmer water in the core, it expands, thereby splintering and spraying the frozen ice shell. The splinters being fine in size are moved up by the air currents and carry a net positive charge to the upper region of the cloud. The hail stones that travel downwards carry an equivalent negative charge to the lower regions of the cloud and thus negative charge builds up in the bottom side of the cloud.

According to Mason, the ice splinters should carry only positive charge upwards. Water being ionic in nature has concentration of H+ and OH– ions. The ion density depends on the temperature. Thus, in an ice slab with upper and lower surfaces at temperatures T1 and T2, (T1 < T2), there will be a higher concentration of ions in the lower region. However, since H+ ions are much lighter, they diffuse much faster all over the volume. Therefore, the lower portion which is warmer will have a net negative charge density, and hence the upper portion, i.e. cooler region will have a net positive charge density. Hence, it must be appreciated, that the outer shells of the frozen water droplets coming into contact with hail stones will be relatively cooler (than their inner core warmer water) and therefore acquire a net positive charge. When the shell splinters, the charge carried by them in the upward direction is positive.

According to the Reynold’s theory, which is based on experimental results, the hail packets get negatively charged when impinged upon by warmer ice crystals. When the temperature conditions are reversed, the charging polarity reverses. However, the extent of the charging and consequently the rate of charge generation was found to disagree with the practical observations relating to thunder clouds. This type of phenomenon also occurs in thunder clouds.

Rate of Charging of Thunder Clouds:

Mason considered thunder clouds to consist of a uniform mixture of positive and negative charges. Due to hail stones and air currents the charges separate vertically. If λ is a factor which depends on the conductivity of the medium, there will be a resistive leakage of charge from the electric field built up, and this should be taken into account for cloud charging.

This equation assumes initially E = 0 at t = 0, the start of charge separation, i.e. there is no separation initially.

where ε0 is the permittivity of the medium, A is the cloud area and h is the height of the charged region.

where M= Qs.h= the electric moment of the thunder-storm.

The average values observed for thunder-clouds are:

Substituting these values, we get

Calculations using Mason’s theory show that a maximum charge transfer of 3 x 10-3 T esu/cm2 of contact surface for a contact period of 0.01 s, where T is the temperature difference.

The theory and observations of Reynolds et al., gave values of 5 x 10-9 esu per crystal impact for a temperature difference of 5°C. Mason’s theory seems to give much higher values, yet it explain the phenomenon satisfactorily.