Parameters and Characteristics of Lightning Strokes:

The parameters and Characteristics of Lightning Strokes include the amplitude of the currents, the rate of rise, the probability distribution of the above, and the waveshapes of the lightning voltages and currents.

Typical oscillograms of the lightning current and voltage waveshapes on a transmission line are shown in Figs 8.11 and 8.12. The lightning current oscillograms indicate and initial high current portion which is characterized by short front times up to 10 μs. The high current peak may last for some tens of microseconds followed by a long duration low current portion lasting for several milliseconds. This last portion is normally responsible for damages (thermal damage). 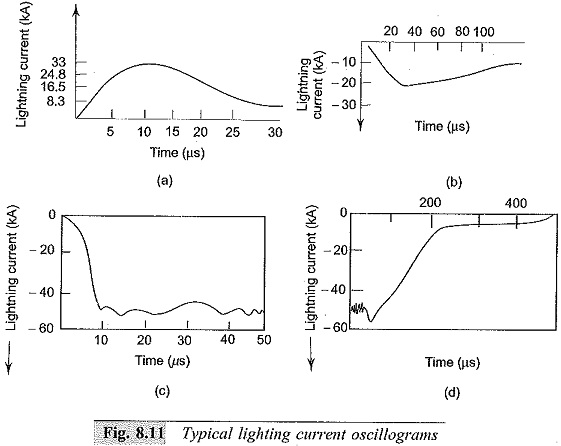 Lightning currents are usually measured either directly from high towers or buildings or from the transmission tower legs. The former gives high values and does not represent typical currents that occur on electrical transmission lines, and the latter gives inaccurate values due to non-uniform division of current in legs and the presence of ground wires and adjacent towers.

Measurements made by several investigators and committees indicated the large strokes of currents (> 100 kA) are possible (Fig. 8.7). It was shown earlier that tall objects attract a large portion of high current strokes, and this would explain the shift of the frequency distribution curves towards higher currents.

Other important Characteristics of Lightning Strokes are time to peak value and its rate of rise. From the field data, it was indicated that 50% of lightning stroke currents have a rate of rise greater than 7.5 kA/μs, and for 10% strokes it exceeded 25 kA/μs. The duration of the stroke currents above half the value is more than 30 μs.

Measurements of surge voltages indicated that a maximum voltage, as high as 5,000 kV, is possible on transmission lines, but on the average, most of the Characteristics of Lightning Strokes give rise to voltage surges less than 1000 kV on lines. The time to front of these waves varies from 2 to 10 μs and tail times usually vary from 20 to 100 μs. The rate of rise of voltage, during rising of the wave may be typically about 1 MV/μs.

Characteristics of Lightning Strokes on transmission lines are classified into two groups:

When a thunder cloud directly discharges onto a transmission line tower or line wires it is called a direct stroke. This is the most severe form of the stroke. However, for bulk of the transmission systems the direct strokes are rare and only the induced strokes occur.

When the thunderstorm generates negative charge at its ground end, the earth objects develop induced positive charges. The earth objects of interest to electrical engineers are transmission lines and towers. Normally, it is expected that the lines are unaffected because they are insulated by string insulators. However, because of high field gradients involved, the positive charges leak from the tower along the insulator surfaces to the line conductors. This process may take quite a long time, of the order of some hundreds of seconds. When the cloud discharges to some earthed object other than the line, the transmission line is left with a huge concentration of charge (positive) which cannot leak suddenly.

The transmission line and the ground will act as a huge capacitor charged with a positive charge and hence overvoltages occur due to these induced charges. This would result in a stroke and hence the name “induced lightning stroke“.