On the occurrence of an Unsymmetrical Faults on Three Power System, the currents in the three lines become unequal and so is the phase displacement among them. It may be noted that the term `unsymmetry’ applies only to the fault itself and the resulting line currents. However, the system impedances and the source volt­ages are always symmetrical through its main elements viz. generators, transmission lines, synchoronous reactors etc. There are three ways in which unsymmetrical faults may occur in a power system (see Fig. 18.1).

The Solutions of Unsymmetrical Faults on Three Power System problems can be obtained by either (a) Kirchhoff’s laws or (b) Symmetrical components method. The latter method is preferred because of the following reasons :

In 1918, Dr. C.L. Fortescue, an American scientist, showed that any unbalanced system of 3-phase currents (or voltages) may be regarded as being composed of three separate sets of balanced vectors viz. 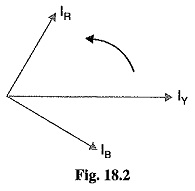 The current in any phase is equal to the vector sum of positive, negative and zero phase sequence currents in that phase as shown in Fig. 18.4. 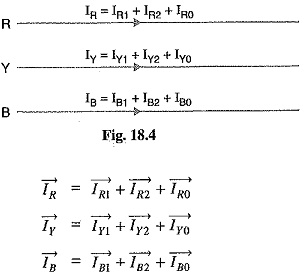 The following points may be noted :

As the symmetrical component theory involves the concept of 120° displacement in the positive sequence set and negative sequence set, therefore, it is desirable to evolve some operator which should cause 120° rotation. For this purpose, operator ‘a’ (symbols h or λ are sometimes used instead of ‘a’) is used. It is defined as under :

The operator ‘a’ is one, which when multiplied to a vector rotates the vector through 120° in the anticlockwise direction.

Consider a vector I represented by OA as shown in Fig. 18.5. If this vector is multiplied by operator ‘a’, the vector is rotated through 120° in the anticlockwise direction and assumes the posi­tion OB.

If the vector assuming position OB is multiplied by operator ‘a’, the vector is further rotated through 120° in the anticlockwise direction and assumes the position OC.

Properties or Operator ‘a’