Excellent alphanumeric characters can be displayed by using dot matrix LEDs with an LED at each dot location. Commonly used Dot Matrix Displays of prominent characters are 5 x 7, 5 x 8, and 7 x 9, of which 5×7 Dot Matrix Led Display Character Patterns shown in Fig. 2.20 (a), is very popular due to economic considerations. 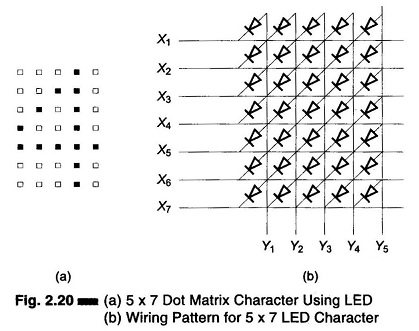 The two wiring patterns of dot matrix displays are as follows. 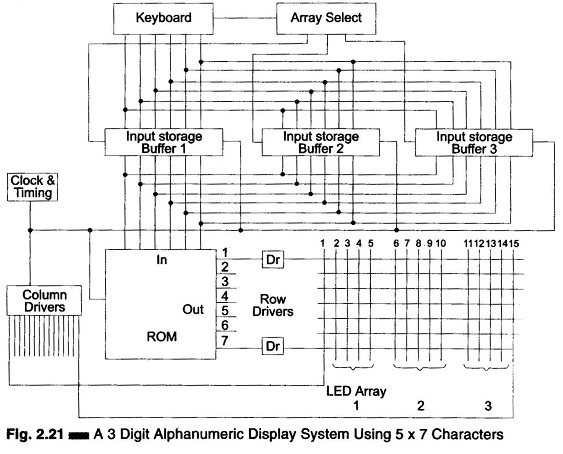 Bar graph displays are analogue displays which are an alternative to conventional D’ Arsonval moving coil meters. They use a closely packed linear array or column of display elements, i.e. “DOT-LED’ S”, which are independently driven so that the length of the array (or the height of the column) corresponds to the voltage or current being measured. These displays are generally used in the panel meters to accept analog input signals and produce an equivalent display of the input signal level by illuminating the corresponding LEDs, as shown in Bar Graph of LEDs Fig. 2.22. 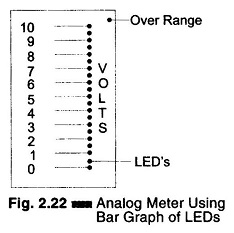 Electro luminescent displays are an important means of light generation. They can be fabricated using polycrystalline semiconductors, and in view of their simple technology, brightness of display and possibility of different colours, are rapidly gaining in popularity.

The powder type consist of powder phosphor with some binding material e.g. organic liquids deposited on a sheet of glass. The glass has transparent conductive segments (e.g. 7 segment displays) or dots (dot matrix display) along with the required conductive leads on the side on which phosphor is coated for electrical connections.

A metallic electrode, usually aluminium, is placed over the phosphor in a pressure cell by vacuum evaporation, so as to form an electrical connection on the other side of the phosphor. The resulting device is capacitive, because of poor conduction paths in phosphor. An ac field applied across the chosen segment (or dot) and aluminium electrode excites the phosphor, resulting in emission of light. In film type structures the EL powder structure is replaced by a polycrystalline phosphor film which is deposited on a glass substrate using a vacuum or pressure cell. These devices can be operated by ac as well as dc.