Incandescent Display has been a basic process of light generation for several decades. This process is now down in fully integrated electronic displays. 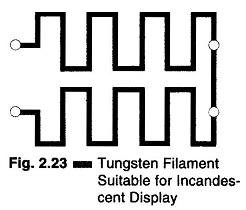 A thin film of tungsten can be made to emit light if its temperature is raised to about 1200°C by electrical excitation. A 5 x 7 character array is formed on a ceramic substrate employing such films in a matrix form and is used as an integrated electronic display unit. Figure 2.23 gives a typical tungsten film or filament suitable for a dot location in the display.

An array of such filaments can be formed on ceramic substrates using conventional thin film technology commonly used in semiconductor fabrication.

Considering the filament dimensions and the dimensions of commonly available substrates, an array of three characters can be located on a 2.5 cm ceramic substrate.

16 segment incandescent display are also available, but their display is slow, because of the large thermal time constant associated with the filaments.