Segmented gas discharge display work on the principle of gas discharge glow, similar to the case of Nixie tubes. They are mostly available in 7 segment display or 14 segment form, to display numeric and alphanumeric characters.

Since these devices require high voltages, special ICs are developed to drive them. The construction of a 7 Segment Display using Gaseous Discharge is shown in Fig. 2.16. Each segment (decimal point) of the 7 segment display formed on a base has a separate cathode. The anode is common to each member of the 7 segment group which is deposited on the covering face plate. The space between the anodes and cathodes contains the gas. For each group of segments, a ‘keep alive’ cathode is also provided. For improving the switching speeds of the display a small constant current (a few micro amps) is passed through this keep alive cathode, which acts as a source of ions. Pins are connected to the electrodes at the rear of the base plate, with the help of which external connections can be made. 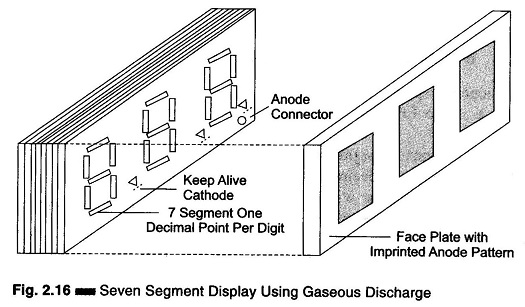 The major disadvantage of this gas discharge tube is that high voltage is required for operating it. Therefore, high voltage transistors, in the range of 150 — 200 V, are required as switches for the cathodes. A major advantage is that the power consumed is extremely small, because a bright display can be obtained even for currents as low as 200 μA. 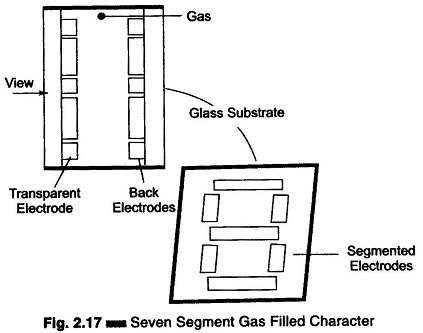 This display follows a simple construction. Figure 2.17 gives the structure of a typical 7 segment display making use of a Gas Discharge Display.

The device uses a glass substrate, shown in Fig. 2.17. Back electrodes of the thick film type serve as cathode segments, and front electrodes of the thin film type serve as transparent anodes. A gas, typically neon, is filled in the discharge space between the cathode and anode segment. The gas is struck between the cathode and anode of a chosen segment so that the cathode glow provides the illumination. All numeric characters can be displayed by activating the appropriate segment.

Display panels of rows or columns of such characters can be easily constructed by extending a single character. The power requirements of such devices are more or less in the same range as those for Nixie tubes.