The D’Arsonval movement used in moving coil indicating instruments can also provide the movement in a Galvanometer Type Recorder.

The D’Arsonval movement consists of a moving coil placed in a strong magnetic field, as shown in Fig. 12.2(a). 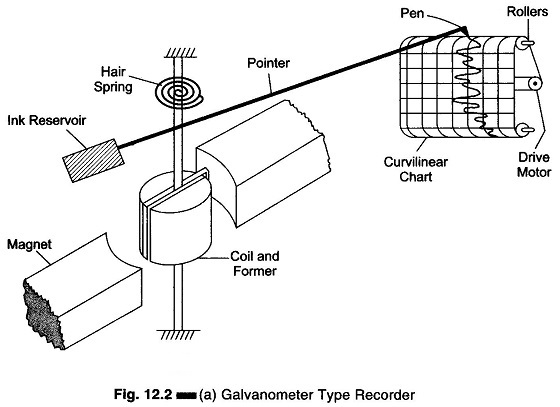 In a galvanometer type recorder, the pointer of the D’Arsonval movement is fitted with a pen-ink (stylus) mechanism.

The paper is pulled from a supply roll by a motor driven transport mechanism. Thus, as the paper moves past the pen and as the pen is deflected, the signal waveform is traced on the paper.

Galvanometer type recorders are well suited for low frequency ac inputs obtained from quantities varying slowly at frequencies of upto 100 c/s, or in special cases up to 1000 c/s.

Because of the compact nature of the galvanometer unit (or pen motor) this type of recorder is particularly suitable for multiple channel operation. Hence it finds extensive use in the simultaneous recording of a large number of varying transducers outputs.

This recorder uses a curvilinear system of tracing. The time lines on the chart must be arcs of radius R (where R is the length of the pointer), and the galvanometer shaft must be located exactly at the center of curvature of a time line arc. Improper positioning of the galvanometer or misalignment of the chart paper in the recorder can give a distorted response, i.e. having a negative rise time or a long rise time. One method of avoiding the distorted appearance of recordings in curvilinear coordinates is to produce the recording in rectangular coordinates. In this design, the chart paper is pulled over a sharp edge that defines the locus of the point of contact between the paper and the recording stylus. The stylus is rigidly attached to the galvanometer coil and wipes over the sharp edge as the coil rotates.

The recorders can work on ranges ranging from a few mA/mV to several mA/mV. These moving galvanometer type recorders are comparatively inexpensive instruments, having a narrow bandwidth of 0 – 10 Hz. They have a sensitivity of about 0.4 V/mm, or from a chart of 100 mm width a full scale deflection of 40 mV is obtained.

Paper speed is an important consideration for several reasons.

Some recorders contain a timing mechanism that prints a series of small dots along the edge of the paper chart, as the paper moves through the recorder. This time marker produces one mark per second.

These types of recorders are mostly used as optical recorders, and contain a light source provided by either an ultra violet or tungsten lamp. 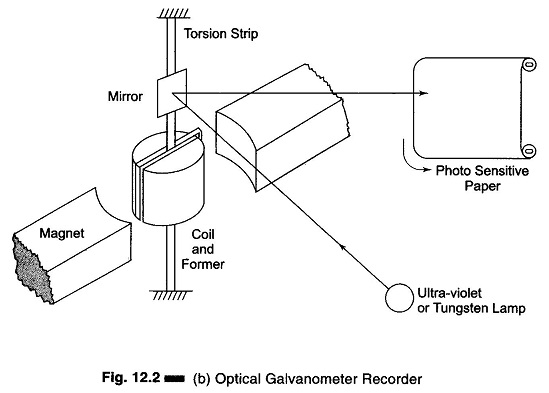 A small mirror is connected to the galvanometer movement and the light beam is focused on this mirror, as shown in Fig. 12.2(b).

The beam reflected from the mirror is focused into a spot on a light sensitive paper.

As the current passes through the coil, the mirror deflects. The movement of the light beam is affected by the deflection of the small mirror, and the spot on the paper also varies for the same reason, thus tracing the waveform on the paper.