if the branches 3, 5 and 8 are removed from the graph, we see that the connected graph of Fig. 2.19 (a) is separated into two distinct parts, each of which is connected as shown in Fig. 2.19 (b). One of the parts is just an isolated node. Now suppose the removed branch 3 is replaced, all others still removed. Figure 2.19 (c) shows the resultant graph. The graph is now connected. Likewise replacing the removed branches 5 and 8 of the set { 3, 5, 8} one at a time, all other ones remaining removed, we obtain the resulting graphs as shown in Figs 2.19 (d) and (e). The set formed by the branches 3, 5 and 8 is called the cut-set of the connected graph of Fig. 2.19 (a).

A Cutset Matrix Concept is oriented by arbitrarily selecting the direction. A cut-set divides a graph into two parts. In the graph shown in Fig. 2.20, the cut-set is {2, 3}. It is represented by a dashed line passing through branches 2 and 3. This Cutset Matrix Concept separates the graph into two parts shown as part-1 and part-2. We may take the orientation either from part-1 to part-2 or from part-2 to part-1. 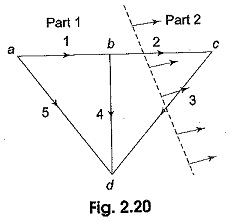 KCL is also applicable to a cut-set of a network. For any lumped electrical network, the algebraic sum of all the cut-set branch currents is equal to zero. While writing the KCL equation for a cut-set, we assign positive sign for the current in a branch if its direction coincides with the orientation of the cut-set and a negative sign to the current in a branch whose  direction is opposite to the orientation of the cut-set. Consider the graph shown in Fig. 2.21. 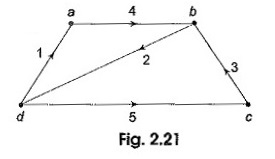 It has five branches and four nodes. The branches have been numbered 1 through 5 and their orientations are also marked. The following six cut-sets are possible as shown in Fig. 2.22 (a)-(f). 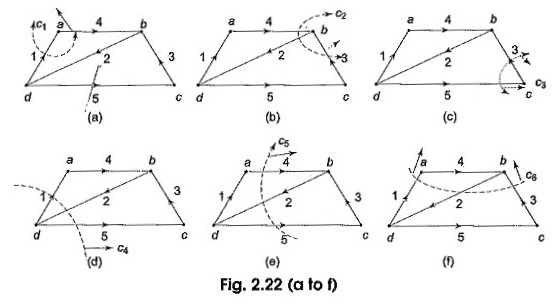 Applying KCL for each of the cut-set we obtain the following equations. Let i1,i2,….i6 be the branch currents.

These equation can be put into matrix form as 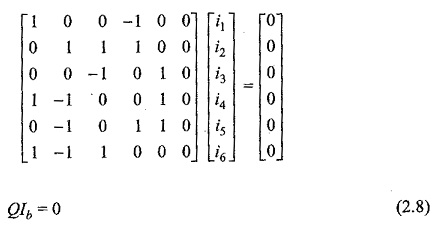 The all cut set matrix can be written as Q = [qij].

where qij is the element in the ith row and jth column. The order of Q is number of cut-sets X number of branch as in the graph.

Observe the set of equation 2.7 in Section 2.8.2 with respect to the graph in Fig. 2.22. Only first three equations are linearly independent, remaining equations can be obtained as a linear combination of the first three. The concept of fundamental cut-set (f-cut-set) can be used to obtain a set of linearly independent equations in branch current variables. The f-cut-sets are defined for a given tree of the graph. From a connected graph, first a tree is selected, and then a twig is selected. Removing this twig from the tree separates the tree into two parts. All the links which go from one part of the disconnected tree to the other, together with the twig of the selected tree will constitute a cut-set. This cut-set is called a fundamental cut-set or f-cut-set or the graph. Thus a fundamental cut-set of a graph with respect to a tree is a cut-set that is formed by one twig and a unique set of links. For each branch of the tree, i.e. for each twig, there will be a f-cut-set. So, for a connected graph having n nodes, there will be (n – 1) twigs in a tree, the number off-cut-sets is also equal to (n — 1).

From the cut set matrix the branch voltages can be expressed in terms of tree branch voltages. Since all tree branches are connected to all the nodes in the graph, it is possible to trace a path from one node to any other node by traversing through the tree-branches.

We can express each branch voltage in terms of twig voltages as follows. 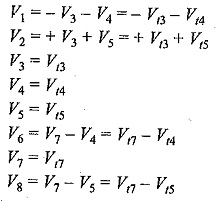 The above equations can be written in matrix form as 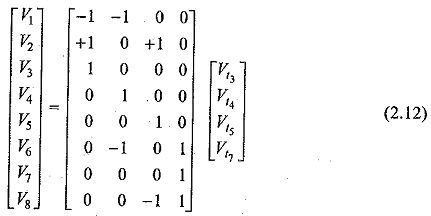 Equation 2.13 shows that each branch voltage can be expressed as a linear combination of the tree-branch voltages. For this purpose fundamental cut set (f-cut-set) matrix can be used without writing loop equations.