Tie Set Matrix – For a given tree of a graph, addition of each link between any two nodes forms a loop called the fundamental loop. In a loop there exists a closed path and a circulating current, which is called the link current. The current in any branch of a graph can be found by using link currents.

The fundamental loop formed by one link has a unique path in the tree joining the two nodes of the link. This loop is also called f-loop or a tie set.

Let i1, i2,….i6 be the branch currents with directions as shown in Fig. 2.16 (a). Let us add a link in its proper place to the tree as shown in 2.16 (c). It is seen that a loop .I1 is formed by the branches 1, 5 and 6. There is a formation of link current, let this current be I1. This current passes through the branches 1, 5 and 6. By convention a fundamental loop is given the same orientation as its defining link, i.e. the link current I1 coincides with the branch current direction i1 in ab. A tie set can also be defined as the set of branches that forms a closed loop in which the link current flows. By adding the other link branches 2 and 3, we can form two more fundamental loops or f-loops with link currents I2 and I3 respectively as shown in Figs 2.16 (d) and (e). 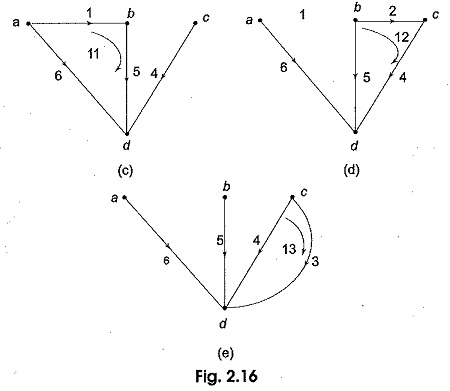 Kirchhoff’s voltage law can be applied to the f-loops to get a set of linearly independent equations. Consider Fig. 2.17. 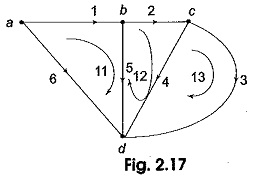 There are three fundamental loops I1, I2 and I3 corresponding to the link branches 1, 2 and 3 respectively. If V1, V2,…V6 are the branch voltages the KVL equations for the three f-loops can be written as

The above equation can be written in matrix form as

where B is an I x b matrix called the tie set matrix or fundamental loop matrix and Vb is a column vector of branch voltages.

The element bij of B is defined as

bij = 1 when branch bj is in the f-loop Ii(loop current) and their reference directions coincide.

bij = —1 when branch bj is in the f-loop Iiloop current) and their reference directions are opposite.

It is possible to express branch currents as a linear combination of link current using matrix B.

where [BT] is the transpose of the matrix [B]. Equation (6) is known as link current transformation equation. 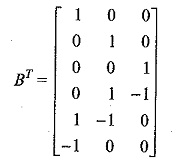 The branch current vector [Ib]  is a column vector. 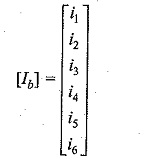 The loop current vector [IL] is a column vector 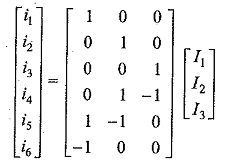 The branch currents are