Define Incidence Matrix is nothing but a mathematical model to represent the given network with all the information available. The information regarding the network is nothing but which branches are incident at which node and what are the orientations relative to the nodes. All this information is written in a matrix form which is called complete incidence matrix. It is represented by Aa.

Consider following network and its oriented graph as shown in Fig. 5.9. 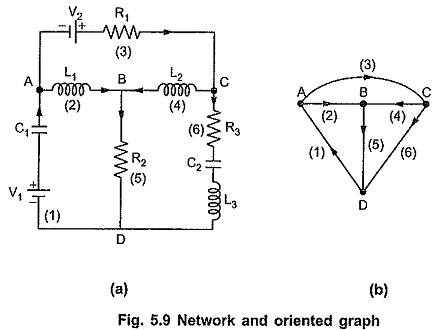 There are 4 nodes A, B, C, D and 6 branches as 1, 2, 3, 4, 5 and 6. The directions are selected randomly for explanation purpose. For a graph , if there are ‘n’ nodes and ‘b’ branches, the complete incidence matrix Aa = ahk is a rectangular matrix of order n x b. The standard conventions to be followed while writing the incidence matrix are as given below

The complete incidence matrix of the network shown in Fig. 5.9 (b) is as given below in the tabular form.

The above result can be written in matrix form as follows,

In above matrix, the summation of elements in any column results in zero value. This is because each of the branch is considered in one column. Each branch connects two nodes. The current flows towards the node at one end of the branch, while it flows away from the node at other end. 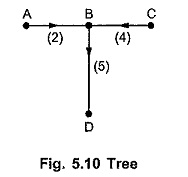 The reduced incidence matrix can be written as,

AT is the square matrix of the order (n – 1) x (n – 1) whose columns corresponds to twigs, hence name of the matrix is AT.

The number of possible trees is given by following relation,

Each row in the matrix corresponds to a node of the graph. Each row has non zero entries such as +1 and -1 depending upon the orientation of branch at the nodes. Also the entries in all other columns of that row are zero.

The properties are as follows.