The incidence of elements to nodes in a connected graph is shown by the element node incidence matrix (A). Arrows indicated in the branches of a graph result in an oriented or a directed graph. These arrows are the indication for the current flow or voltage rise in the network. It can be easily identified from an oriented graph regarding the incidence of branches to nodes. It is possible to have an analytical description of an oriented-graph in a matrix form. The dimensions of the matrix A is n x b where n is the number of nodes and b is number of branches. For a graph having n nodes and b branches, the complete incidence matrix A is a rectangular matrix of order n x b.

In matrix A with n rows and b columns an entry aij in the ith row and jth column has the following values.

Following the above convention its incidence matrix A is given by 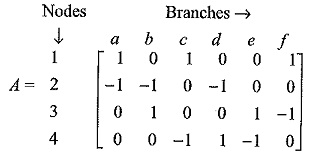 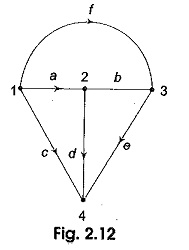 The entries n the first row indicates tha three branches a, c and fare incident to node 1 and they are oriented away from node 1 and therefore the entries a11;a13 and a16 are + 1. Other entries in the 1st row are zero as they are not connected to node 1. Likewise, we can complete the incidence matrix for the remaining nodes 2, 3 and 4.

Properties of Incidence Matrix A

Following properties are some of the simple conclusions from incidence matrix A.

It is possible to find the exact number of trees that can be generated from a given graph if the reduced incidence matrix A1 is known and the number of possible trees is given by Det (A1AT1) where AT1 is the transpose of the matrix A1.

Kirchhoff’s current law (KCL) of a graph can be expressed in terms of the reduced incidence matrix as A1 I = 0.

A1, I is the matrix representation of KCL, a where I represents branch current vectors I1,I2,……I6. 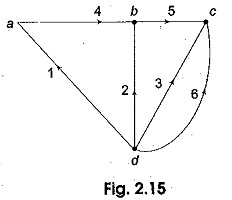 These equations can be written in the matrix form as follows

A1 is the reduced incidence matrix of a graph with n nodes and b branches. And it is a (n — 1) x b matrix obtained from the complete incidence matrix of A deleting one of its rows. The node corresponding to the deleted row is called the reference node or datum node. It is to be noted that A1Ib = 0 gives a set of n — I linearly independent equations in branch currents I1,I2,……I6. Here n = 4. Hence, there are three linearly independent equations.