Consider Indefinite Admittance Matrix of a linear network with n terminals as shown in the Fig. 5.26. 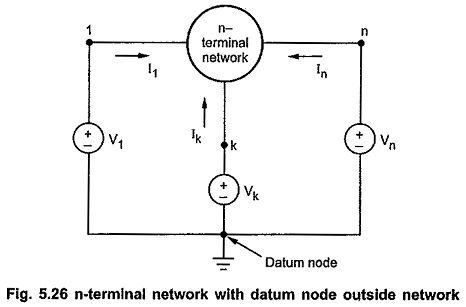 Let us consider a zero potential reference node or datum node arbitrarily outside the n-terminal network. Let the voltage sources connected between the n-terminals of the network and datum node be V1,V2,V3, … Vn. Let the currents entering the terminals be I1,I2,I3, … In respectively. 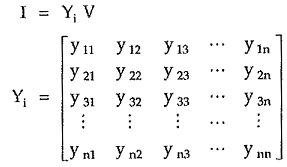 The matrix Yi is known as indefinite admittance matrix.

The parameter yjk is the ratio of current entering jth terminal when all the node are shorted to reference node except kth node to the voltage at kth node. To determine yjk,

The properties of indefinite admittance matrix are as follows,