The utility of op-amp increases considerably if it is used in a closed loop mode. The Closed Loop Configuration of Op amp mode is possible using feedback. The feedback allows to feed some part of the output back to the input. In linear applications the op-amp is always used with negative feedback. The feedback helps to control gain which otherwise drives op-amp into saturation. 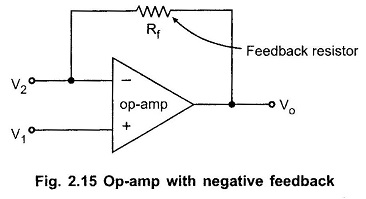 Most of the linear circuits use op-amp in a closed loop mode with negative feedback with Rf. This is because, due to reduced gain, the output is not driven into the saturation and the circuit behaves in a linear manner.

In order to understand the operation of circuits with feedback, let us make two realistic assumptions about op-amp namely Zero Input Current and Virtual Ground.