This method of Loop Analysis is specially useful for the circuits that have many nodes and loops. The difference between application of Kirchhoff’s laws and loop analysis is, in loop analysis instead of branch currents, the loop currents are considered for writing the equations. The another difference is, in this method, each branch of the network may carry more than one current. The total branch current must be decided by the algebraic sum of all currents through that branch. While in analysis using Kirchhoff’s laws, each branch carries only one current. The advantage of this method is that for complex networks the number of unknowns reduces which greatly simplifies calculation work. 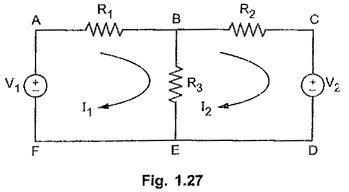 Consider following network shown in the Fig. 1.27. There are two loops. So assuming two loop currents as I1 and I2. While assume loop currents, consider the loops such that each element of the network will be included at least once in any of the loops.

Now branch B-E carries two currents; I1 from B to E and I2 from E to B. So net current through branch B-E will (I1 – I2) and corresponding drop across R3 must be as shown below in the Fig. 1.28. 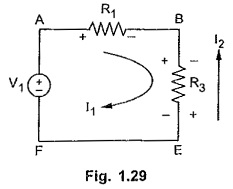 Writing loop equations for the network shown in the Fig. 1.27.

By solving above simultaneous equations any unknown branch current can be determined.

Points to be Remembered for Loop Analysis: 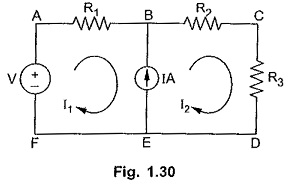 So all such branches, consisting current sources must be analysed independently. Get the equations for current sources interms of loop currents. Then apply KVL to the remaining loops which are existing without involving the branches consisting of current sources. The loop existing, around a current source which is common to two loops is called supermesh. In the Fig. 1.30, the loop ABCDEFA is supermesh.