Figure 2.25 (a) is a planar circuit. Figure 2.25 (b) is a non-planar circuit and Fig. 2.25 (c) is a planar circuit which looks like a non-planar circuit. It has already been discussed that a loop is a closed path. .A mesh is defined as a loop which does not contain any other loops within it. To apply Mesh Analysis Equation, our first step is to check whether the circuit is planar or not and the second is to select mesh currents. Finally, writing Kirchhoff’s voltage law equations in terms of unknowns and solving them leads to the final solution. 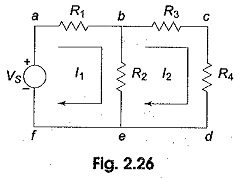 Observation of the Fig. 2.26 indicates that there are two loops abefa, and bcdeb in the network. Let us assume loop currents I1 and I2 with directions as indicated in the figure. Considering the loop abefa alone, we observe that current I1 is passing through R1, and (I1 — I2) is passing through R2. By applying Kirchhoff’s voltage law, we can write

By rearranging the above equations, the corresponding mesh current equations are

By solving the above equations, we can find the currents I1 and I2. If we observe Fig. 2.26, the circuit consists of five branches and four nodes, including the reference node. The number of mesh currents is equal to the number of mesh equations.

In general, if we have B number of branches and N number of nodes including the reference node then the number of linearly independent mesh equations M= B — (N—1).

The mesh equations for a general planar network can be written by inspection without going through the detailed steps. Consider a three mesh networks as shown in Fig. 2.30.

The loop equations are

Reordering the above equations, we have

The self resistance of loop 1,R11= R1+R2, is the sum of the resistances through which I1 passes.

Similarly, R22=(R2+R3) and R33=R4+R5 are the self resistances of loops two and three, respectively. The mutual resistances R13=0,R32=0 are the sums of the resistances common to the mesh currents indicated in their subscripts.

Vb=-V2,Vc=V2 are the sum of the voltages driving their respective loops.