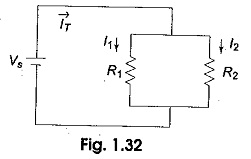 Formula of Power in Parallel Circuit:

The total power supplied by the source in any parallel resistive circuit is equal to the sum of the powers in each resistor in parallel, i.e.

where m is the number of resistors in parallel,Ps is the total power and Pm is the power in the last resistor.