Skip to content
Home » Indicators and Display Devices » What is the use of Light Emitting Diode (LED)?

What is the use of Light Emitting Diode (LED)?:

What is the use of Light Emitting Diode (LED)? – The Light Emitting Diodes, Fig. 2.10 (a) is basically a semiconductor PN junction diode capable of emitting electromagnetic radiation under forward conductions. The radiation emitted by LEDs can be either in the visible spectrum or in the infrared region, depending on the type of the semiconductor material used. Generally, infra-red emitting LED’s are coated with Phosphor so that, by the excitation of phosphor visible light can be produced. LEDs are useful for electronics display and instrumentation. Figure 2.10 (b) shows the symbol of an LED.

The advantage of using LEDs in electronic displays are as follows.

Different materials used for doping give out different colours. 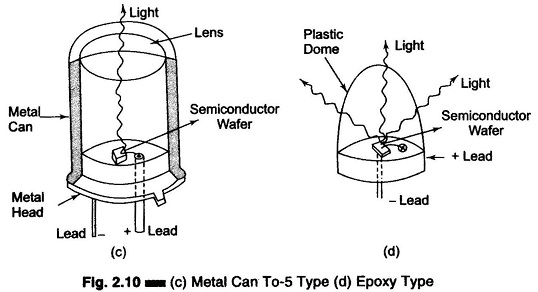 Alphanumeric displays using LEDs employ a number of square and oblong Light Emitting areas, arranged either as dotmatrix or segmented bar matrix. Alphanumeric LEDs are normally laid out on a single slice of semiconductor material, all the chips being enclosed in a package, similar to an IC, except that the packaging compound is transparent rather than opaque. Figure 2.10 (c) and (d) gives typical LED Packages for single element LEDs.