Starting Methods of Induction Motor – At the time of starting the motor slip being unity, the load resistance with reference to the approximate circuit model of Fig. 9.23 is meaning thereby that short-circuit conditions prevail.

Therefore, the motor current at starting can be as large as five to six times the full-load current. In comparison the exciting current in the shunt branch of the circuit model can be neglected reducing the circuit to that of Fig. 9.31.

Assuming for simplicity that as a rough approximation

i.e., the magnetizing current is neglected even under full-load conditions.

Direct starting : When a squirrel-cage motor is started ‘direct-on-line,’

To protect their supply systems, the electrical utilities have regulations against short-time current peaks; the consumer is heavily penalized through suitable tarrif for such peaks. Therefore, it is only small-size motors that can be started direct on­line. A bulk consumer can start motors up to 10 kW direct-on-line as long as he arranges to stagger the starting of such motors.

Stator-impedance starting : Inclusion of resistors or inductors in the three lines feeding the stator of the Induction Motor reduces the stator terminal voltage to x V of the rated voltage V. The initial starting current is then 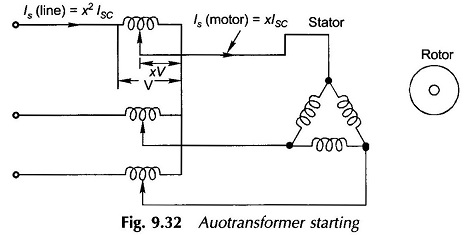 Autotransformer starting : Reduced voltage for starting can be obtained from three autotransformers connected in star as shown in the schematic diagram of Fig. 9.32. If the voltage is reduced to a fraction x of the rated voltage V, the motor starting current (initial) is

The current drawn from the supply is

The starting/full-load torque ratio is

It is found that while the starting torque is reduced to a fraction x2 of that obtainable by direct starting, the starting line current is also reduced by the same fraction. Compared to stator-impedance starting, the line current reduces further by a fraction x while torque remains the same. The autotransformer starting is much superior to the stator-impedance starting. Further, smooth starting and high acceleration are possible by gradually raising the voltage to the full line value. 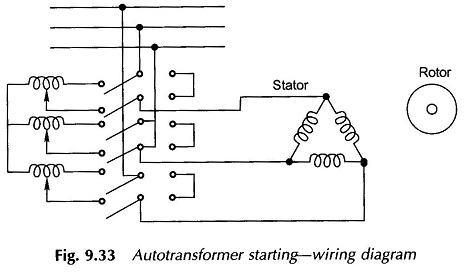 Star-delta starting : The star-delta starting is an inexpensive two-step Starting Methods of Induction Motor. The motor designed for delta running is started across full-line voltage by connecting the phases in star as shown in the schematic diagram of Fig. 9.34.

A star-delta starter is much cheaper than an autotransformer starter and is commonly employed for both small and medium-size motors. The wiring diagram of star-delta starting is shown in Fig. 9.35. 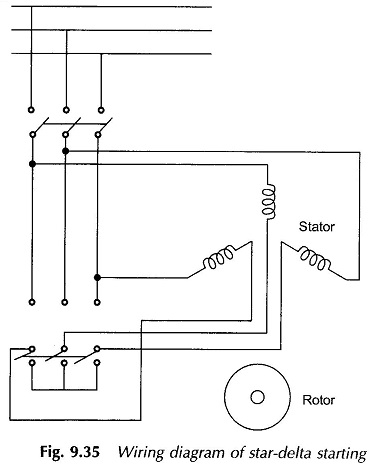 It has already been discussed that in slip-ring motors the starting current is reduced and the starting torque simultaneously increased by adding an external resistance in the rotor circuit. 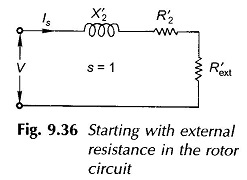 Maximum starting torque is achieved at

which equals the breakdown torque or

By a suitable choice of Rext, the starting current and torque can be both adjusted to desirable levels. Since the maximum starting torque achievable is much more than the full-load torque, the use of slip-ring motors with rotor-resistance starting is ideal for starting on load. The external rotor resistance is arranged in steps which are gradually cut out during starting.