At the time of Starting of DC Motors (n = 0), the induced emf of a motor is zero such that the current drawn from rated voltage supply would be

for a shunt motor. The series field resistance would be included in the denominator for a series motor. For large motors the armature resistance may be 0.01 pu or less; even for lower kW motors it ranges from 0.0625 to 0.125. Thus in full-voltage Starting of DC Motors, the armature current can be several times (about 100 times for large motors) the rated value.

For several reasons mentioned below such a large current cannot be allowed to flow in a motor even for the short starting period.

For the above-mentioned reasons all motors, except for small and fractional-kW motors, must be started with external resistance included in armature circuit to limit the starting current to safe values. Where variable-voltage dc supply is available, e.g. in the Ward-Leonard speed control scheme, this can be used for motor starting and no starting resistance would be needed.

One point in favour of direct starting must be mentioned here. Since the motor torque with direct start is much higher, the motor starts much more quickly. As a consequence the Joule input per start is much less than that with resistance start. This would be helpful in repeated starting—saving energy and causing less temperature rise.

Maximum allowable starting current is not more than 1.5 to 2.0 times the rated value. These values are safe and yet at the same time permit a high starting torque for quick acceleration of the motor. Where a variable-voltage supply is available for speed control, starting poses no problem at all.

The Starting of DC Motors resistance is arranged in steps and is gradually cut out as the motor accelerates so as to maintain a high average torque during starting.

The connection diagram of a manual face plate starter of a dc shunt motor is shown in Fig. 7.50. The starter handle is shown in its ON position — starting resistance is cut out, which gets included in the field circuit.

The modem practice is to use a push-button type automatic starter in industries. Automatic starters carry out essentially the same functions as the manual ones with electromagnetic relays that short out sections of the robust metallic starting resistors either in a predetermined time sequence or when the armature current has dropped to a preset value. Such an arrangement is shown in Fig. 7.51. Most automatic starters embody extra control and safety features. 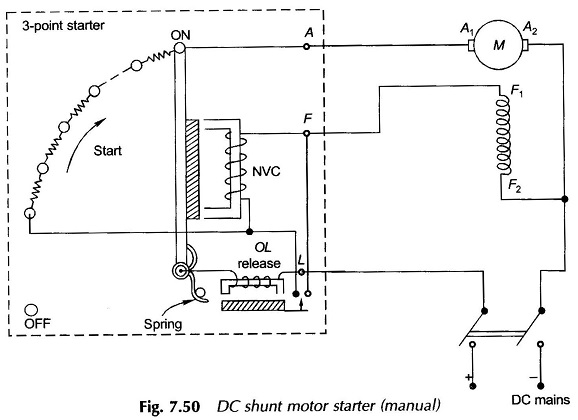 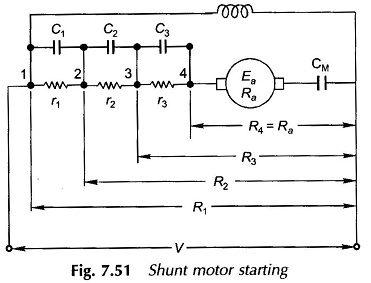 From Fig. 7.51 it is seen that the instant the starter is moved to stud 1 or contactor CM is closed, the current in the circuit reaches a value I1, designated as the upper current limit, given by

Thereafter the current value decreases as the motor speeds up and its back emf rises as shown in Fig. 7.52. The current is allowed to reduce to I2, the lower current limit, given by 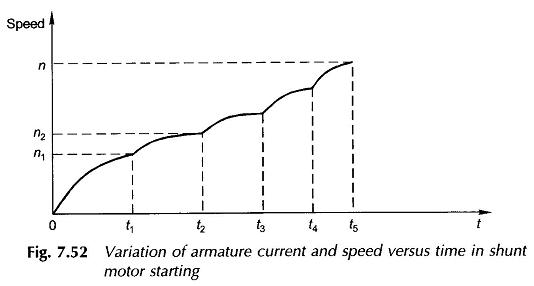 where Ea(n1) is the back emf at speed n1 reached by the motor. At this instant the starter is moved to stud 2 or contactor C1 is closed. The current increases instantaneously to I1 as shown in Fig. 7.47 and satisfies the relationship 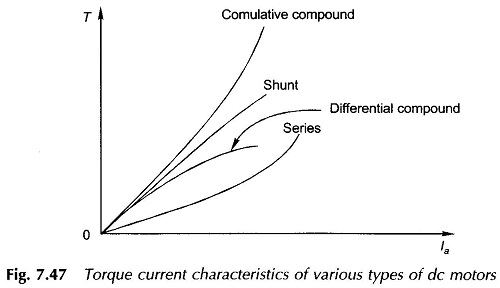 By induction, for a k-stud ((k — 1) sections of external resistance) starter,

Once the designer has selected the upper and lower limits of armature currents during starting, starter step calculations can proceed on the following lines:

Sometimes the number of sections are specified in addition to the upper current limit. This problem can be handled by a slightly different manipulation of Eqs (7.62) to (7.69).