Starting of Induction Motor Drives arrangement is chosen based on the load requirements and nature of supply (weak or stiff). It may be required to have following features:

Usually, a motor draws 5 to 7 times rated current during starting. When load torque during starting and motor-load-inertia are not large, the Starting of Induction Motor Drives process is over in a few seconds and therefore, motor temperature does not exceed the permissible value. In such applications, motor can always be started direct on line, provided the voltage dip caused by large starting current is not beyond a permissible value. For small size motors voltage dip in the supply line is usually below acceptable level. When the motor is of large capacity and/or fed from a weak system, some starting arrangement becomes necessary for reducing the starting current. In these applications it does not matter if the reduction in starting current is accompanied by a reduction in starting torque. 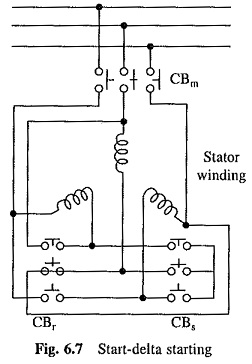 In this method, an induction motor designed to operate normally with delta connection is connected in star during starting. This allows reduction in stator voltage and current by 1/√3. Since motor torque is proportional to the square of stator terminal voltage, starting torque is reduced to one-third. A circuit for star-delta starting is shown in Fig. 6.7. Circuit breakers CBm and CDs are closed to start the machine with star connection. When steady-state speed is reached CBs is opened and CBr is closed to connect machine in delta.

Reduced voltage for starting can also be obtained from an auto-transformer. For a secondary to primary turns ratio of aT, motor terminal voltage and stator current are reduced by aT. This reduces the current drawn from supply by a2T. Since torque is proportional to the square of motor terminal voltage, it is also reduced by a2T. After the motor has accelerated, it is connected to full supply voltage. An auto-transformer starter circuit is shown in Fig. 6.8(a). First, CBs1 is closed followed by CBs2. When motor has accelerated to full speed, CBs2 is opened and CBm closed. Now CBs1 is opened to disconnect auto-transformer from the supply. 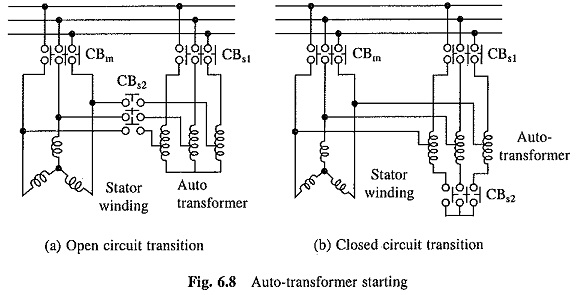 In both, star-delta and auto-transformer starting methods, changeover from low voltage to full voltage connection disrupts the flow of stator current and stator field collapses. Rotor current continues to flow due to its large time constant. Field produced by rotor currents induces voltages in the stator windings. Phase of the induced voltages is independent of supply voltages. A large current inrush is produced at the time of re-connection when induced and supply voltages are out of phase. When the current inrush is not acceptable, closed circuit transition is employed. A closed-circuit transition scheme for an auto-transformer starter is shown in Fig. 6.8(b). It employs three circuit breakers: CBs1, CBs2 and CBm. First CBs2 is closed to close the star point connection of the auto-transformer. CBs1 is closed next. This completes low voltage connection of auto-transformer and the motor starts. After steady-state speed is reached, circuit breaker CBs2 is opened. Motor now runs with the upper part of auto-transformer phase windings in series with the stator. Windings simply function as series reactors. Now circuit breaker CBm is closed, which bypasses series reactors and connects motor directly to the supply.

At the beginning of starting alternatively, first CBs1 is closed instead of CBs2. Then motor and transformer will not produce magnetizing current surge simultaneously.

Starting current can also be reduced by connecting a three-phase reactor in series with stator.

When motor reaches full speed, the reactor is bypassed. Figure 6.9 shown such a scheme. CBm is closed to start the machine. After full speed is reached CBs is closed to short the reactor. It is advantageous to connect reactor at the neutral end of stator winding. This minimizes its voltage rating and also maintains its voltage and the voltage of breaker CBs at neutral potential during normal motor operation. 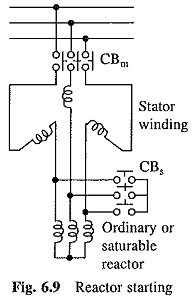 In some applications starting torque must be controlled steplessly. For example in textile machines, it must be varied smoothly, otherwise fibre threads will break during starting. Such a starting arrangement is termed Soft Start. 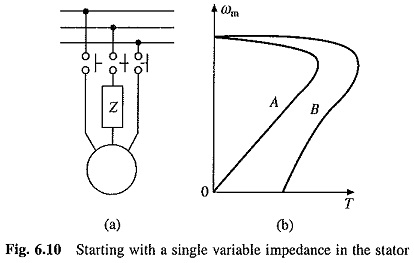 Some squirrel-cage motors have two or more stator windings which are connected in parallel during normal operation. During starting, only one winding is connected. This increase stator impedance and reduces starting current. Such a starting scheme is called Part Winding Starting. Its implementation for a machine with two stator windings is shown in Fig. 6.11. Machine starts with winding 1 when CBm is closed. After full speed is reached, CBs is closed to connect winding 2. 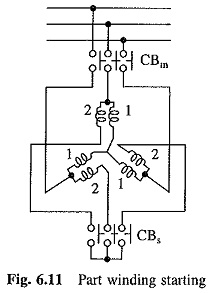 Wound-rotor motors are generally started by connecting external resistors in the rotor circuit (Fig. 6.12(a)). The highest value of resistance is chosen to limit current at zero speed within the safe value. As the motor accelerates, sections in the external resistor are cut out one-by-one by closing contacts C1, C2 and C3 so as to limit the rotor current between specified maximum and minimum values (Fig. 6.12(b)). 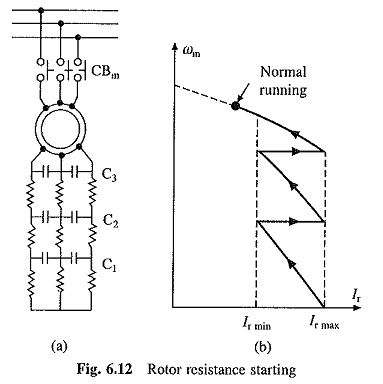 Since most of the rotor copper loss occurs in external resistors, rotor temperature rise during starting is substantially lower compared to starting methods described earlier. Important feature of this Starting of Induction Motor Drives method is that the starting torque and torque-to-current ratio are high. It is, therefore, suitable for applications requiring fast acceleration, frequent starts and stops, starting with heavy load, and starting with high inertia load.