In the Single Phase DC Series Motor Drives the field is connected in series with the armature. The field current is the same as the armature current. The schematic of a Single Phase DC Series Motor Drives fed from a phase controlled converter is shown in Fig. 4.62. DC Series Motor are capable of high starting torque and constant power operation at all speeds. They are used in traction, cranes, hoists, etc. The waveforms of voltage and current of a series motor fed from a thyristor converter are shown in Fig. 4.63. Both continuous and discontinuous conduction are considered. 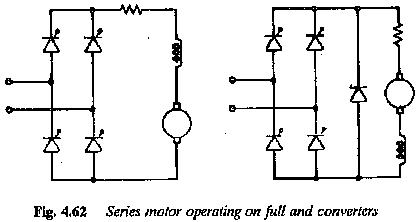 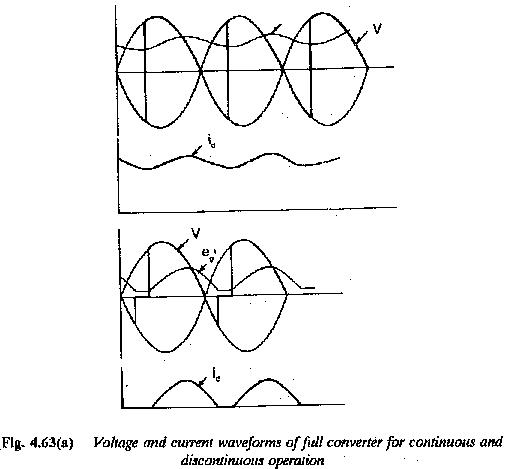 Another point of difference, which is also a reason for better performance of a DC Series Motor compared to a separately excited one, is the smoothing effect provided by field inductance, which effectively increases the circuit inductance. If a further improvement is required in the performance, a small inductance is sufficient.

A comparison of DC Series Motor operation on full and semi converters shows that the current is continuous in almost the entire region of operation when operating on semi converters. The addition of a small inductance makes the current continuous over the complete region. This can be seen also when the motor operates on a converter with FWD. The improvement in the perfor­mance can also be observed with respect to p.f. and ratios of peak to average and rms to average currents. This is due to the free wheeling of the current through the diodes of a semi converter or through the FWD of the converter with FWD. 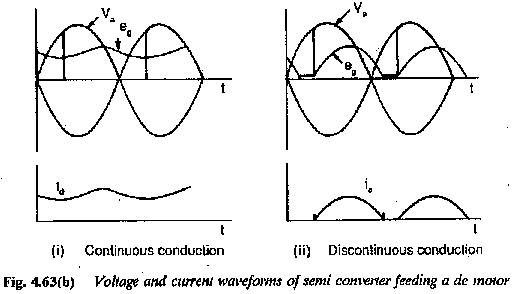