In discontinuous conduction mode of Single Phase Fully Controlled Rectifier Control of DC Motor, current starts flowing with the turn-on of thyristors T1 and T3 at ωt = α. Motor gets connected to the source and its terminal voltage equals vs. The current, which flows against both, E and the source voltage after ωt = π, falls to zero at β. Due to the absence of current T1 and T3 turn-off. Motor terminal voltage is now equal to its induced voltage E. When thyristors T2 and T4 are fired at (π + α), next cycle of the motor terminal voltage va starts.

In continuous conduction mode of Single Phase Fully Controlled Rectifier Control of DC Motor, a positive current flows through the motor, and T2 and T4 are in conduction just before α. Application of gate pulses turns on forward biased thyristors T1 and T3 at α. Conduction of T1 and T3 reverse biases T2 and T4 and turns them off. A cycle of va is completed when T2 and T4 are turned-on at (π + α) causing turn-off of T1 and T3.

Since armature current is is not perfect dc, the motor torque fluctuates. Since torque fluctuates at a frequency of 100 Hz, motor inertia is able to filter out the fluctuations, giving nearly a constant speed and rippleless E.

Drive operation is described by the following equations:

Solution of Eq. (5.72) has two components—one due to the ac source (Vm/Z) sin (ωt – Φ), and other due to back emf ( – E/Ra). Each of these components has in turn a transient component. Let these be represented by a single exponent K1e-t/τa, then

where Va and la are respectively dc components of armature voltage and current respectively. From Fig. 5.26(6)

Armature current consists of dc component Ia and harmonics. When flux is constant, only dc component produces steady torque. Harmonics produce alternating torque components, the average value of which is zero. Therefore, motor torque is still given by Eq. (5.7). From Eqs. (5.7), (5.8), (5.79) and (5.80) 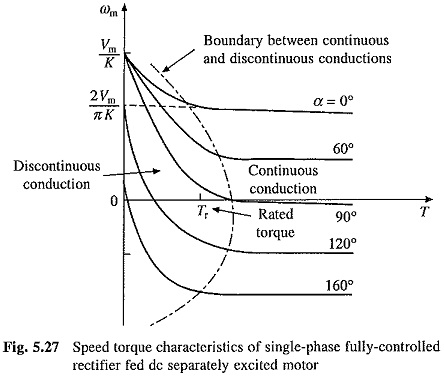 The drive operates in quadrants I (forward motoring) and IV (reverse regenerative braking). These operations can be explained as follows:

From Eq. (5.84), under the assumption of continuous conduction, dc output voltage of rectifier varies with α as shown in Fig. 5.28(a). When working in quadrant I, ωm is positive and α ≤ 90°; and polarities of Va and E are shown in Fig. 5.28(b). For positive Ia this causes rectifier to deliver power and the motor to consume it, thus giving forward motoring. Polarities of E, Ia and Va for quadrant IV operation are shown in Fig. 5.28(c). E has reversed due to reversal of ωm. Since Ia is still in same direction, machine is working as a generator producing braking torque. Further due to α > 90°, Va is negative, suggesting that the rectifier now takes power from dc terminals and transfers it to ac mains. This operation of rectifier is called inversion and the rectifier is said to operate as an inverter. Since generated power is supplied to the source in this operation, it is regenerative braking.