Emitter Follower at High Frequencies circuit is given in Fig. 19.48(a). A capacitance CL is included across the load because the emitter follower is often used to drive capacitive loads. This is because of its small output impedance. 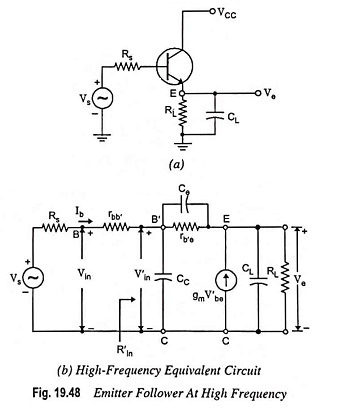 Applying Kirchhoff’s current law to nodes B′ and E respectively [Fig. 19.48(b)], we have

By elimination of V′in from above equations, the voltage gain Ve/Vs is obtained in terms of s.

A very simple approximate expression for the transfer function can be obtained by applying Miller’s theorem to the circuit given in Fig. 19.48 (b).

The low frequency gain of an emitter follower is approximately equal to unity i.e. K ≈ 1 and K – 1 ≈ 0. Thus input time constant τin ≈ (Rs + rbb′) Cc and the output time constant τout is proportional to CL. Since load is assumed to be highly capacitive, τout >> τin. It means that the upper 3-dB frequency is determined to a good approximation, by the output circuit alone. Using K = 1, we have

Since the input impedance between terminals B′ and C is very large in comparison to Rs + rbb′, then K represents the overall voltage gain

A somewhat better approximation for fH is given as

Substituting the value of K from Eq. (19.77) in above equation, we have