Voltage Level Translator (Level Shifter) is usually an emitter follower circuit which is used to shift the dc level at the output of the intermediate stage downward to zero volt w.r.t. ground.

The level translator should be included to shift the output dc level because of following reasons:

1. The direct coupling in cascaded differential amplifiers produces rise in dc level at the emitter (from stage to stage). This increase in dc level alters the operating point of coming stages and thus, limits the output voltage swing and sometimes distorts the output signal.

2. The voltage at the output terminal of second stage is well above the ground. This additional voltage circuits the peak-to­peak output voltage swing without distortion and produces distortions (errors) in the dc output signal.

There are many circuits available to work as level translator. The sim­plest one is depicted in Fig. 20.61 (a) which is basically an emitter follower. 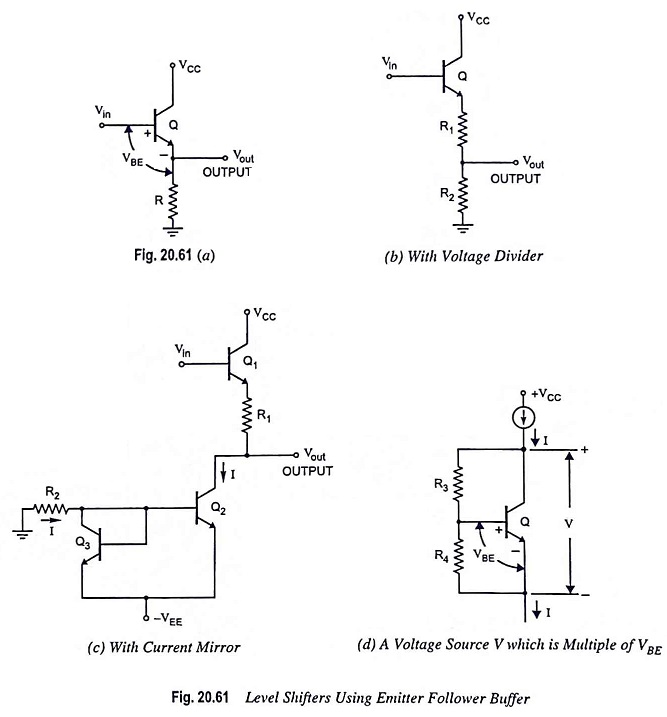 Thus, the level shifter also acts as a buffer for isolation of the high gain stage from the output stage. Available amount of shift is

If the shift given by Eq. (20.97) is not sufficient, then we can use an emitter follower with a voltage divider as shown in Fig. 20.61 (b) . The voltage shift is now increased by the voltage drop across R1. However, this arrangement has the drawback of attenuation of signal voltage by R2/R1 + R2. This can be easily overcome by replacing R2 by a current mirror I as depicted in Fig. 20.61 (c).

Now available amount of shift is

In this arrangement ac attenuation is avoided due to high resistance of current source.

Another voltage commonly used in μA 741 op-amp is depicted in Fig. 20.61 (d). Neglecting base current in comparison to the current in voltage divider R3, R4, the circuit behaves as a multiplier of VBE as