Classification of Fluids are as follows.

Ideal fluids are having following properties.

(i) It is compressible.

(ii) They are viscous in nature.

(iii)Some resistance is always offered by the fluid when it is in motion.

The viscosity at any given temperature and pressure is constant for a Newtonian fluid and is independent of the rate of deformation.

In plastics, up to a certain value of shear stress there is no flow. After the limit it has a constant viscosity at any given temperature.

In shear thinning materials, the viscosity will increase with rate of Deformation (du/dy).

In shear thinning materials, viscosity will decrease with rate of Deformation (du/dy).

Example: For Non-Newtonian fluids are paint, toothpaste, and ink. 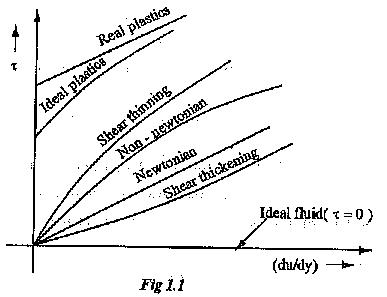