An electric filter is often a frequency selective circuit that passes a specified band of frequencies and blocks or attenuates signals of frequencies outside this band. Classification of Active Filters are as follows.

The elements used in passive filters are R, C and L. Active filters, on the other hand, employ transistors or opamps in addition to resistors and capacitors. The type of element used dictates the operating frequency range of the filter.

For example, RC filters are commonly used for audio or low frequency operation, whereas LC filters or crystal filters are employed at RF or high frequency. Because of their high Q value (figure of merit), the crystals provide stable operation at high frequency. Inductors are not used in the audio range because they are large, costly and may dissipate a lot of power. An Classification of Active Filters offers the following advantages over a passive filter.

Since the opamp is capable of providing a gain, the input signal is not attenu­ated, as in a passive filter. Also, an active filter is easier to tune.

Because of the high input resistance and low output resistance of the opamp, the active filter does not cause loading of the source or load.

Active filters are typically more economical than passive filters. This is because of the variety of cheaper opamps available, and the absence of inductors.

Although active filters are most extensively used in the field of communications and signal processing, they are employed in one form or another in almost all sophisticated electronic systems, radio, TV, telephones, radar, space satellites and biomedical equipment.

The most commonly used Classification of Active Filters are as follows.

Each of these filters uses an opamp as the active element and R, C as the passive element. 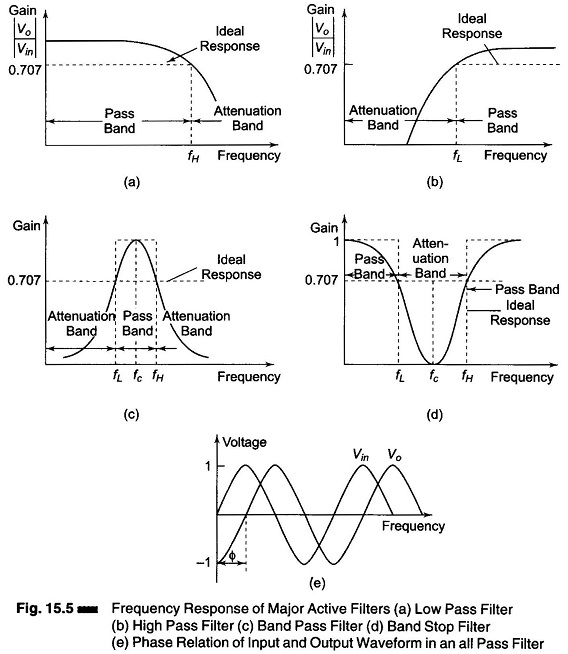 Figure 15.5 shows the frequency response characteristics of the Classification of Active Filters. The ideal response is shown by the dashed lines, while solid lines indicate the practical filter response.

A low pass filter has a constant gain from 0 Hz to a high cutoff frequency fH. Therefore, the band width is also fH.

Figure 15.5(a) shows the frequency response of a low pass filter. As indicated by the dashed line, an ideal filter has a zero attenuation in its pass band and infinite attenuation in the attenuation band. However, ideal filter response is not practical because linear network cannot produce discontinuities. But, it is possible to obtain a practical response that approximates the ideal response by using special design techniques as well as precision components and high speed opamps.

Butterworth, Chebyschev, Bessel and Elliptic filters are the most commonly used practical filters for approximating the ideal response. In many low pass filter applications, it is necessary for the closed loop gain to be as close to unity as possible within the pass band.

Figure 15.5 (b) shows a high pass filter with a stop band 0 < f < fH and a pass band f > fL, where fL is the low cutoff frequency and f is the operating frequency.

The band reject filter is exactly opposite to the band pass. It has a band stop between two cutoff frequencies fH and fL, and two pass bands, 0 < f < fL and f > fH. The band reject is also called a band stop or band elimination filter. The frequency response of a band stop filter is shown in Fig. 15.5(d). In this, fc is called the centre frequency, since it is approximately at the centre of the pass or stop band. 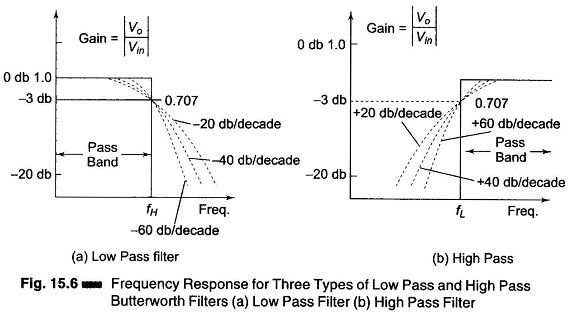 By contrast, for the first order high pass filter, the gain increases at the rate of 20 db/decade in the stop band, that is, until f = fL. The increase is 40 db/ decade for the second order high pass filter and so on. Figure 15.6 (b) shows the frequency response for three types of high pass Butterworth filters.