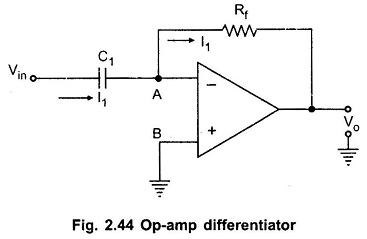 The node B is grounded. The node A is also at the ground potential hence VA = 0.

As input current of op amp is zero, entire current I1 flows through the resistance Rf.

From the input side we can write,

The negative sign indicates that there is a phase shift of 180° between input and output. The main advantage of such an active differentiators is the small time constant required for differentiation. 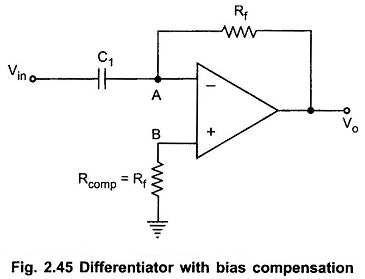 By Miller’s theorem, the effective resistance between input node A and ground becomes

Av is the gain of the op-amp which is very large. Hence effective Rf becomes very very small and hence the condition RfC1 ≪ T gets satisfied at all the frequencies.

In practice a resistance Rcomp = Rf is connected to the noninverting terminal to provide the bias compensation. This is shown in the Fig. 2.45.

Let us study the output waveforms, for various input signals.

For simplicity of understanding, assume that the values of Rf and C1 are selected to have time constant (Rf C1) as unity.

Let the input waveform is of step type with a magnitude of A units. Mathematically it is expressed as,

Now mathematically, the output of the differentiators must be,

This is because A is constant. Actually the step input takes a finite time to rise from 0 to A volts. Due to this finite time, the differentiator output is not zero but appears in the form of a spike at t = 0. As the circuit acts as an inverting differentiator, the negative going spike or pulse appears at t = 0 and after that output remains zero. 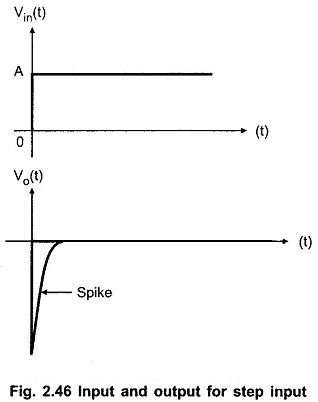 Both input and output waveforms of the differentiator with a step input, are shown in the Fig. 2.46. 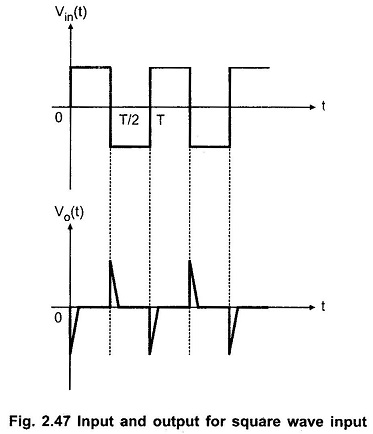 The input and output waveforms are shown in the Fig. 2.47.

Let the input waveform be purely sinusoidal with a frequency of ω rad/sec. Mathematically it can be expressed as,

where Vm is the amplitude of the sine wave and T is the period of the waveform.

Let us find out the expression for the output.

Thus the output of the differentiators is a consine waveform, for a sine wave input. The input and output waveform is shown in the Fig. 2.48. 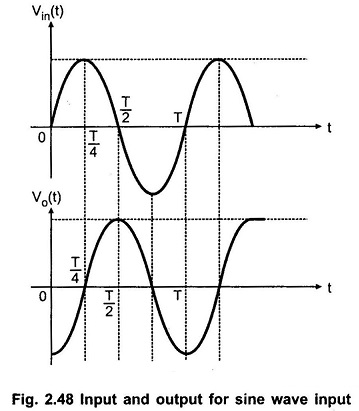 Also the input impedance XC1 = (1/2πfC1) decreases as frequency increases. This makes the circuit very much sensitive to the noise. Thus when such noise gets amplified due to high gain at high frequency, noise may completely override the differentiated output.