In order to visualize the effect of flow of secondary current in a transformer, certain idealizing assumptions will be made which are close approximations for a practical transformer. A transformer possessing these ideal properties is hypothetical (has no real existence) and is referred to as the Ideal Transformer on Load. It possesses certain essential features of a real transformer but some details of minor significance are ignored which will be reintroduced at a refined stage of analysis. The idealizing assumptions made are listed below:

Figure 3.9 shows an Ideal Transformer on Load having a primary of N1 turns and a secondary of N2 turns on a common magnetic core. The voltage of the source to which the primary is connected is 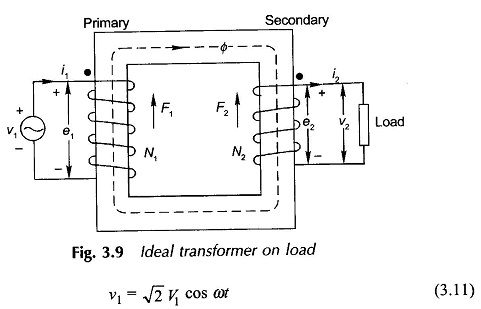 while the secondary is initially assumed to be an open circuited. As a consequence, flux Φ is established in the core (Eq. (3.6)) such that

but the exciting current drawn from the source is zero by virtue of assumption (iii) above. The flux Φ which is wholly mutual (assumption (ii) above) causes an emf

to be induced in the secondary of polarity marked on the diagram for the winding direction indicated. The dots marked at one end of each winding indicate the winding ends which simultaneously have the same polarity due to emfs induced. From Eqs (3.12) and (3.13)

Since a, the transformation ratio, is a constant, e1 and e2 are in phase. The secondary terminal voltage is

It is, therefore, seen that an Ideal Transformer on Load changes (transforms) voltages in direct ratio of the number of turns in the two windings. In terms of rms values Eq. (3.16) implies

Now let the secondary be connected to a load of impedance Z2 so that the secondary feeds a sinusoidal current of instantaneous value i2 to the load. Due to this flow of current, the secondary creates mmf F2 = i2N2 opposing the flux Φ. However, the mutual flux Φ cannot change as otherwise the (ν1,e1) balance will be disturbed (this balance must always hold as winding has zero leakage resistance). The result is that the primary draws a current i1 from the source so as to create mmf F1 = i1 N1 which at all time cancels out the load caused mmf i2N2 so that Φ is maintained constant independent of the load current flow, Thus

Obviously i1 and i2 are in phase for positive current directions marked on the diagram (primary current in at the dotted terminal and secondary current out of the dotted terminal). Since flux Φ is independent of load, so is e2, and ν2 must always equal e2 as the secondary is also resistanceless. Therefore, from Eqs (3.17) and (3.19)

which implies that currents in an ideal transformer transform in inverse ratio of winding turns. Equation (3.20) in terms of rms values will read

i.e. the VA output is balanced by the VA input.

Figure 3.10(a) shows the schematic of the Ideal Transformer on Load of Fig.3.9 with dot marks identifying similar polarity ends. It was already seen above that V1 and V2 are in phase and so are I1 and I2. Now 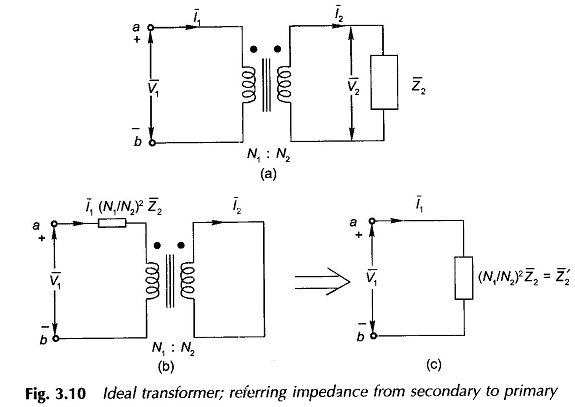 It is concluded from Eq. (3.25) that the impedance on the secondary side when seen (referred to) on the primary side is transformed in the direct ratio of square of turns. Equivalence of Eqs (3.24) and (3.25) to the original circuit of Fig. 3.10(a) is illustrated through Figs 3.10(b) and (c). Similarly an impedance Z1 from the primary side can be referred to the secondary as

Equation (3.25) illustrates the impedance-modifying property of the transformer which can be exploited for matching a fixed impedance to the source for purposes of maximum power transfer by interposing a transformer of a suitable turn-ratio between the two.