An Ideal Transformer on Load is characterised by assuming

If the flux produced by the current flowing in a coil links all the turns, the self inductance of either the primary or secondary coil is proportional to the square of the number of turns of the coil. This can be verified from the following results.

The magnitude of the self induced emf is given by

If the flux linkages of the coil with N turns and current are known, then the self induced emf can be expressed as 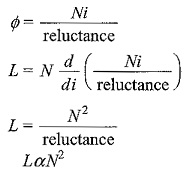 From the above relation it follows that

where a = N2/N1 is called the turns ratio of the transformer. The turns ratio, a, can also be expressed in terms of primary and secondary voltages. If the magnetic permeability of the core is infinitely large then the flux would be confined to the core. If Φ is the flux through a single turn coil on the core and N1, N2 are the number of turns of the primary and secondary, respectively, then the total flux through windings 1 and 2, respectively, are

Figure 10.12 shows an ideal transformer to which the secondary is connected to a load impedance ZL. The turns ratio N2/N1 = a. 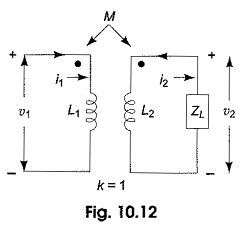 The Ideal Transformer on Load is a very useful model for circuit calculations, because with few additional elements like R, L and C, the actual behavior of the physical transformer can be accurately represented. Let us analyse this transformer with sinusoidal excitation. When the excitation are sinusoidal voltages or currents, the steady state response will also be sinusoidal. We can use phasors for representing these voltages and currents. The input impedance of the transformer can be determined by writing mesh equations for the circuit shown in Fig. 10.12.

where V1, V2 are the voltage phasors, and I1,I2 are the current phasors in the two windings. jωL1 and jωL2 are the impedances of the self inductances and jωM is the impedance of the mutual inductance, ω is the angular frequency.

when the coefficient of coupling is assumed to be equal to unity,

We have already established that L2/L1 = a2

where a is the turns ratio N2/N1

As L2 is assumed to be infinitely large compared to ZL

The above result has an interesting interpretation, that is the ideal transformers change the impedance of a load, and can be used to match circuits with different impedances in order to achieve maximum power transfer. 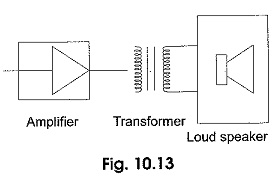 For example, the input impedance of a loudspeaker is usually very small, say 3 to 12 Q, for connecting directly to an amplifier. The transformer proper turns ratio can be placed between the output of the amplifier and the input of the loudspeaker to match the impedances as shown in Fig. 10.13.